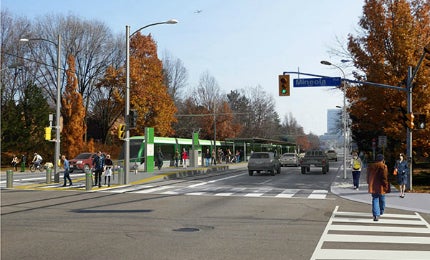 The Hurontario-Main Light Rail Transit is a new public transit project connecting the cities of Mississauga and Brampton in Ontario, Canada. It will operate on a 23km-long corridor, providing faster and frequent transportation along the Hurontario and Main Streets.

The project is a joint initiative between the City of Mississauga, the City of Brampton, and Metrolinx. Estimated cost of the project, which received a commitment of full provincial funding in April 2015, is $1.6bn. Construction is scheduled to start in 2018 and the service is anticipated to begin by 2022.

It is estimated that the light rail system will have an annual ridership of approximately 35 million by 2031. It is one of the ‘Big Move’ projects in the Metrolinx transportation plan for Greater Toronto.

Completion of the Hurontario-Main Street Corridor Master Plan took place in 2011 and concluded a light rail transit to be the preferred option for rapid transportation along the arterial Hurontario-Main corridor.

The preliminary design and transit project assessment process began in December 2011 and was completed in September 2014 after receiving a Notice to Proceed from the Minister of Environment and Climate Change.

The 23km-long, double-track light rail line will extend from the Port Credit GO station on Hurontario Street in Mississauga to Brampton GO station in downtown Brampton.

This line will loop around downtown Mississauga, to the west along Burnhamthorpe and Rathburn Road and north along Duke of York Boulevard, before continuing north on Hurontario Street until Brampton’s downtown Main Street.

The route will have 26 stops, including three stops within the downtown Mississauga city centre and two stops in downtown Brampton.

It is expected that the LRT line will transport more people in lesser time than the existing Brampton Züm Bus Rapid Transit and Mississauga MiExpress bus services that operate along the route. It will also traverse five mobility hubs, connecting to existing lines of the GO Transit network as well as other transit systems across the Greater Toronto and Hamilton Area.

The at-grade line will mostly run within the existing road right-of-way except at the section that will run parallel to the CN Rail corridor before entering the Brampton GO Station and along a new link between Rathburn Road and Hurontario Street. It will also be segregated from other road traffic except at road intersections and few other segments.

The stops will have a platform length of 90m and an average inter-stop distance of approximately 900m. Low stop platforms will be built as a central platform between the tracks or single platforms on either side of the tracks.

A fleet containing multi-section low-floor vehicles will be operated by the light rail line. They will have a maximum width of 2.65m. The vehicles will initially contain two units, with a length of 60m, but in the long term, the line will operate three-unit vehicles having a length of 90m.

The low-floor vehicles, combined with low platforms will allow fast, step-free boarding and alighting at the stops.

Power for the trains will come from electricity for most of the corridor length. The traction power system, consisting of traction power substations and the overhead contact system, will supply 750V DC power to the trains.

A 7ha maintenance and storage facility that will include the LRT control centre will be built south of Highway 407 between Hurontario Street and Kennedy Road.

A team led by SNC-Lavalin was selected by the Cities of Mississauga and Brampton to undertake the preliminary design and environmental assessment of the project.

"It is estimated that the light rail system will have an annual ridership of approximately 35 million by 2031."

SNC-Lavalin was responsible for the project management, as well as the transit system and civil engineering services. Steer Davies Gleave provided transit and transportation planning, and micro and macro simulation traffic modelling of the proposed corridor.

DIALOG and MMM Group were responsible for the urban planning and design, as well as the public realm components of the project while PMA Landscape Architects was the landscape designer. Golder Associates was selected to provide geotechnical engineering services.

LEA Consulting developed the offline capacity review for the project as well as the Intelligent Transportation Systems (ITS) and traffic signal preliminary design work.

Brad Golden and Co was in charge of the public art while William Clarke provided drainage and stormwater management services. J E Coulter Associates and RWDI AIR consulted on the noise and vibration, and air quality, respectively.