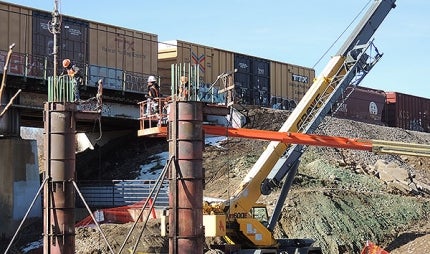 RTD received the Record of Decision for the Gold Line project in November 2009. Construction of the line began in August 2011 and opening is expected in 2016.

The new commuter rail transit line will start from Denver Union Station and end at Ward Road. It is estimated to have an average daily ridership of approximately 16,800 to 20,100.

Bombardier will manufacture 775 trains to replace BART’s existing fleet, under the project dubbed as Fleet of the Future.

The Pecos Junction, located immediately east of Pecos Street on the south side of the existing BNSF railroad tracks, will offer parking for 525 vehicles by 2030.

The Federal station will be located on the east side of Federal, just north of the existing BNSF freight tracks. The station will provide parking for 300 vehicles.

The Arvada Gold Strike station will be located to the east of Sheridan. The Olde Town Arvada station will have parking space for 500 vehicles and will be constructed west of Vance on the north side of the existing freight tracks.

With a current parking space of approximately 150, the Arvada Ridge station will be located west of Kipling on the north side of the existing freight tracks.

The Ward Road station will be the final stop and will be located on the north side of the existing freight tracks and east of Ward Road.

Rolling stock for the Gold Line

The commuter trains running on the Gold Line will have a passenger seating capacity of 232 and will operate at a maximum speed of 79mph. The vehicles will feature a dynamic braking system along with advanced safety features such as a positive train control and vehicle monitoring system.

The rolling stock will be equipped with an advanced video surveillance system for better security control. Advanced features such as a real-time passenger information system and ADA-compliant level boarding entry will also be included.

The trains will be powered by a 25kV AC overhead electrical system.

The design-build-operate-maintain and finance contract for the Gold Line and other Eagle P3 elements was awarded to Denver Transit Partners (DTP), which is owned by Fluor Enterprises, Uberior Infrastructure Investments and Laing Investments.

"The commuter trains running on the Gold Line will operate at a maximum speed of 79mph."

Hyundai Rotem was contracted to supply electric commuter trains for the Gold line. The first four cars were assembled at the Changwon plant in South Korea, while the remaining cars will be assembled at its Philadelphia plant.