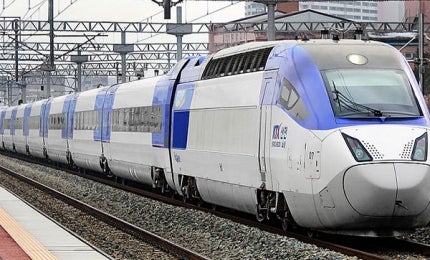 The Korea Rail Network Authority (KRNA) is developing the new 231km-long Honam high-speed railway (HSR) line from Osong to Mokpo in South Korea in two phases. The first phase will run between Osong and Gwangju and the second phase between Gwangju and Mokpo.

Feasibility study for the Honam high-speed rail project was completed in 1990 and the master plan was authorised and announced in August 2006. Construction of the project started in December 2009 and the first phase began operations on 2 April 2015. The second phase is expected to begin operations in 2017.

The project is estimated to cost approximately $10.6bn, including $700m for purchasing rolling stock.

Built in 1914, the Honam HSR line is an addition to the original Honam Line and the Gyeongbu high-speed railway, which began services in 2004.

"The Honam HSR line is an addition to the original Honam Line and the Gyeongbu high-speed railway, which began services in 2004."

The new high-speed line is part of Korail’s Korea Train Express (KTX) system and is expected to accelerate the existing Seoul-Mokpo and Seoul Gwangju KTX high-speed services. When fully operational, the Honam line is expected to reduce the one-way travel time between Seoul and Gwangju from more than 12h to just 90min.

The Honam Line will be a double-track line, which connects Osong Station in Chuncheongbuk-do, Gongju, Iksan, Jeongeup, Songjeong and Mokpo stations. It will allow the passengers to travel from Seoul to Mokpo in one hour and 46min, which is one hour and 19min shorter than that by the earlier Honam line.

Integrated microprocessor interlockings (SEI) is equipped at three stations, including the Osong station, where the original computer-controlled signal box is upgraded to SEI.

Hyundai-Rotem’s KTX-II high-speed train sets will run on the line at a speed of 300km/h. Each train is 388m-long, weighs 771t (including passenger weight), and consists of 935 seats. The trains are driven by 25kV electricity and powered by 12 traction electric motors of 1,130 kW each.

The train sets are equipped with Nexans FLAMEX range of rolling stock cables, which are designed for better passenger safety and security. The cables comply with the majority of international standards, including the European, French and German.

On-carriage computer systems are installed to automatically control the high-speed train. It also consists of a self-diagnosis system to report problems such as a fire, and an air cleaning system to create an optimal environment inside the carriages.

Safety measures include an obstruction detection device to restrain the speed of the train when an obstacle falls onto the high-speed rail road, and rail temperature sensors to automatically sense the temperature of the railroad.

A honeycomb-shaped shock-absorber is equipped on the front head of the vehicle to absorb shocks whenever the train collides with an obstacle.

By taking into account the previous train’s location and other railway conditions, the control system transmits an optimised speed continuously to the high-speed trains for their safe operation within the speed limit.

Hyundai-Rotem, a subsidiary of Hyundai Motor Group, was awarded the contract for the supply of 22 train sets (220 cars).

Nexans was awarded a €3.5m contract for the manufacture and supply of specialised rolling stock cables for the KTX-II train sets that run on Honam HSR Line.

Ansaldo STS, within the consortium led by LSIS, was awarded the contract for a signalling and train control system for the Honam HSR line. Systra Korea, in association with SNCF Projects & Engineering, prepared the technical documents for the integrated microprocessor interlockings.

Daeiti was engaged for the construction of signal equipment and for the installation of centralised traffic control (CTC) system for the project.