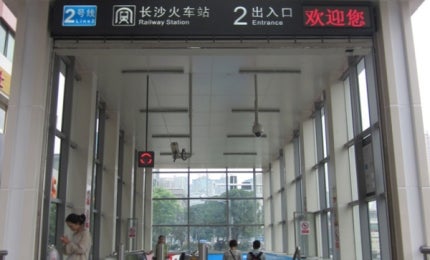 The Changsha Metro project proposal includes the construction of 12 new lines with a total length of 456km and 333 stations. The first six lines, 1 to 6, are expected to be completed by 2020, whereas the remaining lines are yet to receive approvals.

Construction of the first line (Line 2) started in October 2009 and operations officially started in April 2014. It is the first metro line to open to traffic in Changsha.

The Changsha Metro Line 2 is 22.3km long and features 19 stations, including six transfer stations. Construction began in September 2009 and a trial run was conducted in December 2013. The line was completed at an estimated cost of CNY11.9bn (approximately $1.9bn).

“The first six lines, 1 to 6, are expected to be completed by 2020, whereas the remaining lines are yet to receive approvals.”

The 23.55km-long Line 1 runs from Qijubeizhan to Wanjiali Road Station. It comprises 20 stations, including 19 underground and one elevated station. It will serve as the main line of Changsha rail transit. Construction on Line 1 started in December 2010 and trial runs began in December 2014.

The 33.7km-long Metro Line 4 will run from Purui Avenue to Guihua Avenue. It will include a depot, a parking lot and 24 stations, including 13 transfer stations. The feasibility report on the first phase of Line 4 was approved in October 2014 and the project is expected to complete in 2019.

The first phase of Line 5 will run from Panlong Road to Shidai Avenue and will be 22.7km long.

Line 6 is planned to start from Meixihu and terminate at Huanghua International Airport and will include stations at Tongzipo Road, Xiangya Road and Renmin Road.

Standard B-type CSR trains offering a speed of 80km/h run on the Changsha Metro Line 2. Each carriage has a maximum carrying capacity of 240 passengers and the whole train carries 1,440 passengers. The train has a width of 2.8m, height of 3.8m and length of 19.8m.

The Xiamen-Shenzhen high-speed line connects Xiamen in the Fujian Province with Shenzhen in the Guangdong Province of China.

The trains are constructed of full, hollow, aluminium-alloy extrusion and acoustic noise reduction material. Approximately 90% of the material used for the train can be reused. The B-type CSR train is also expected to convert 90% of the power generated by braking into electrical energy.

The trains will be equipped with electric heaters on the passenger seats and ceiling, in order to cope up with the cold and humid climate in Changsha during winter.

A rail car depot at Huangxing and a comprehensive maintenance base will be built as part of the project. Both the facilities will be connected to the Guangda Station, the terminal station of Phase I of Changsha Metro Line 2. A training centre will be set up at the base to provide training services for the staff.

China Railway Eryuan Engineering Group (EREEC) was awarded the contract for the overall project design and survey of the line, along with the design of construction sites and systems.