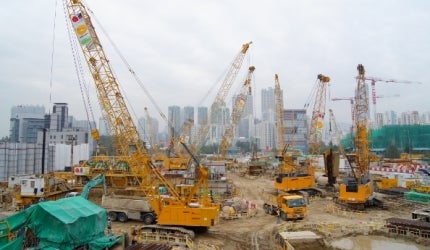 West Kowloon Terminus (WKT) is a new railway station being constructed on the Guangzhou-Shenzhen-Hong Kong Express Rail Link (XRL) in Hong Kong. It is the only station in Hong Kong on the XRL.

The station is situated at Jordan, Kowloon, and will extend underground to the future West Kowloon Cultural District. It will also be connected to Mainland China by a tunnel.

"It is the only station in Hong Kong on the express rail link."

The railway project has generated approximately 11,000 jobs and also helped in the growth of other sectors, such as tourism, retail, catering and professional services

The terminus will have 15 platforms, with six allotted for short distance shuttle train services and nine for long-haul trains. Construction of the station started in October 2011 and is expected to be completed in 2015.

MTR Corporation is constructing the underground rail terminus at an estimated cost of HK$62.4bn ($8bn). The WKT is expected to be the biggest of its kind in the world and handle approximately 99,000 passengers per day by 2016.

Background of the West Kowloon Terminus

The West Kowloon Terminus project symbolises the strengthening relations between China and Hong Kong. The express link terminus will connect Hong Kong and Beijing when completed. It will improve connectivity between mainland China and Hong Kong, leading to the economic growth of both regions.

The station will provide high-speed train services, which will cut down the travel time between Hong Kong and Guangzhou to 48 minutes from the present 100 minutes.

Layout, design and construction of the railway terminus in Hong Kong

The West Kowloon Terminus is spread across an area of over 25 acres. It will be predominantly underground, with just a small portion of it being above ground, which will be furnished with clerestory windows and arched fins, and will have abundant natural lighting.

A series of pedestrian bridges and underpasses will connect the south-most station in the country to the Austin station, Kowloon station and Airport Expressway.

The roof structure of the terminus will be built of glass and steel. The roof will contain pedestrian pathways. Building information modelling (BIM) is being extensively used to manage the construction of the terminus.

The station building will have four levels with immigration counters in different levels for arrivals and departures. It will resemble an airport terminal building, given the fact that it connects two countries.

The West Kowloon Terminus will provide for high speed train services to mainland China and the entire route covered by the XRL network.

The short distance services of WKT will include trains to the adjoining Guangdong Province, cities such as Dongguan, Shenzhen, Guangzhou, and so on. The long distance trains will connect Hong Kong to a minimum 16 locations of mainland China, including Beijing and Shanghai.

The short distance services heading to Shenzhen North and Guangzhou South will be at respective frequencies of four and two trains every hour. Trains starting at WKT will reach a maximum speed of 200kmph, minimising the travel time to all the destinations significantly.

Facilities at the West Kowloon rail terminus for the Express Link

The station will include immigration and customs facilities, duty free outlets, shops, cafes and bars, departure lounges, and arrival/departure halls. It will also have parking and cargo loading facilities.

The terminal was designed by a joint venture lead by Aedas-AECOM. Buro Happold, as part of the JV, provided engineering for the structures, bridges and façade of the terminus.

"The station is situated at Jordan, Kowloon, and will extend underground to the future West Kowloon Cultural District."

A joint venture of Leighton Asia and Gammon is carrying out the construction of the terminus under a HK$8.9bn ($1.1bn) contract. The scope of the contract includes construction of departure lounges, platforms, outlets, and immigration and customs facilities.

Two separate joint ventures of Laing O’Rourke with Bachy Soletache and Hsin Chong/Paul Y are taking care of the construction of approach tunnels of the WKT.

MTR awarded the contract of providing moving walks and escalators to ThyssenKrupp Elevator, in 2012. MTR also awarded a contract to Kone in 2011 to supply 117 elevators for the WKT.

Funding for the railway terminus in Kowloon