The District Department of Transportation (DDOT) 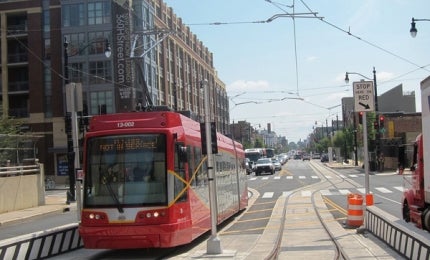 The DC Streetcar is a new railway network under construction to connect the eight wards of the city of Washington DC, US. The project comprises eight lines stretching 37 miles (approximately 60km) across the city.

The first streetcar began services in Washington DC in 1862 and was operational in the city until it was terminated in favour of bus services in January 1962. The new streetcar system construction is a part of the 30-year transit programme of the District Department of Transportation (DDOT).

The project began with the construction on two streetcar segments including The H/Benning Road and the Anacostia Initial Line. The 22-mile long (35.4km) Priority Streetcar System project is implemented under the integrated premium transit (IPT) system and an additional 15 miles (24.14km) of track will be built under the expanded streetcar system (ESS).

The testing of the DC Streetcar system began in December 2013 and will continue as construction is being completed.

The H/Benning line will be the first streetcar line of the project to start passenger services. The 2.4 mile (3.86km) line will serve passengers between Union Station on the west and the Anacostia River on the east. This line is a small portion of the overall One City Line that will cover the city from east to west.

"The testing of the DC Streetcar system began in December 2013 and will continue as construction is being completed."

The second line to be constructed is the 1.1-mile (1.77km) long Anacostia Initial Line (AIL). It will link the Anacostia Metro Station with the Joint Base Anacostia-Bolling (JBAB). The line will also include a storage yard and maintenance facility next to South Capitol Street.

The Anacostia Streetcar Extension project will connect the current AIL section with the 11th St Bridge. The environmental assessment (EA) draft for the line extension has been approved by US Federal Transit Administration (FTA) and Federal Highway Administration (FHWA).

The construction of the H/Benning line began in 2011 under the first phase of the streetcar project. Approximately 80% of the work was completed during the Great Streets roadway reconstruction project. The second construction phase on H Street/Benning Road began in December 2012 and head-span wires along the corridor were installed in 2013.

Construction of the Testing and Commissioning Site began in 2012 and was completed by August 2013. The facility, located on the AIL, is used for testing the streetcar vehicles before their delivery to H/Benning for testing.

The construction of the temporary storage facility for the vehicles has been completed, whereas the Car Barn Training Centre (CBTC) yard construction is nearing completion. The CBTC facilities are being constructed in two phases. The first phase includes the construction tracks and facilities necessary to support system testing and certification, while CBTC building is being built during the second phase. A temporary housing facility is also built for the vehicles.

The platforms of DC Streetcar system will be 60ft to 70ft long, and will accommodate double articulated, 66ft-long low floor streetcar vehicles. The leading edge of the platform will be 7in high and can be sloped to 10in and 14in respectively to cater vehicles with bridge plates and level-boarding feature.

The platforms will feature two types of loading areas, ADA and non-ADA. The leading edge of the platform fits the access to the front door of the vehicle. The ADA-compliant access will be provided by the middle section of the platform.

Most of the track ways will be built using concrete slabs while the areas, which have a dedicated right-of-way for alignment, will use ballast. Unit pavers and grass tracks are planned to be respectively used in the streetscape and neighbouring park areas.

DDOT ordered a total of six vehicles from two manufacturers for testing and commissioning. Three of the vehicles were manufactured and delivered by Inekon and the other three will be supplied by United Streetcar.

All Aboard Florida High-Speed Rail Project, US

All Aboard Florida is a 235-mile high-speed intercity passenger rail project that will connect Miami with Orlando in Florida, US.

Inekon 12 TRIO vehicles operate on 750V DC and have a maximum speed of 70km/h. The vehicles are 3.46m-high and 2.46m-wide, and are fully ADA-accessible with level boarding and a floor height of 350mm.

The DC streetcar vehicles are air conditioned and allow for an easier and faster boarding, thanks to the low-floor centre section. The vehicles are also wheelchair-accessible and can operate in both mixed use traffic and on a separate right of way. Each vehicle can accommodate up to 160 passengers.

The team of Dean-Facchina was selected in June 2012 to complete the design and construction of the H Street and Benning Road streetcar line. RATP Dev McDonald Transit (RDMT) was selected as the operations and maintenance team for the project in July 2012.

The Streetcar Financing and Governance Task Force established by mayor Vincent C Gray evaluates the potential financing options and sources of funds for the project. The task force comprises members from both public and private sectors.