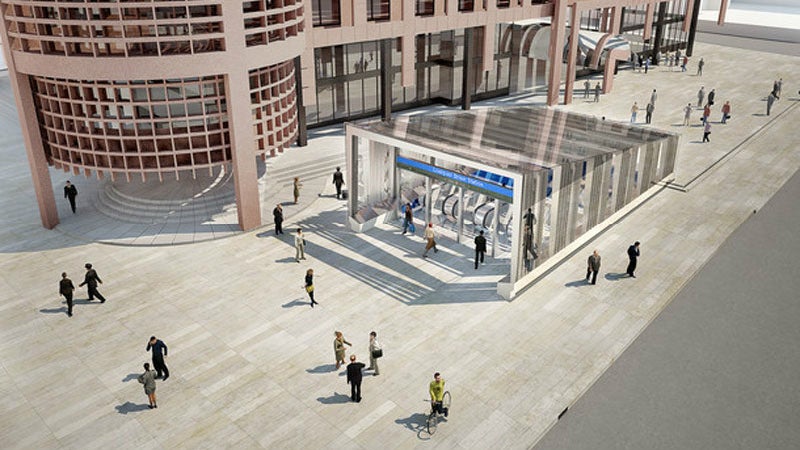 The new station will commence operations in December 2018, with trains terminating at Paddington in the west and Abbey Wood in the east.

The new Liverpool Street station will feature two entrance and ticket halls, eastern and western, which will be connected by two 250m-long tunnels.

The upgraded station will have enhanced connectivity with London Underground stations, Stansted Airport and national rail services. It is expected to reduce the journey times to Canary Wharf, Abbey Wood, and Paddington to six, 18, and ten minutes, respectively.

Public spaces will also be expanded to enhance passenger flow, while ambient waiting spaces will be provided for vehicles.

To access the underground eastern ticket hall at Broadgate, passengers will enter a 5m glazed canopy situated in an open pedestrian plaza. Natural light will enter from below ground during the day, while at night the canopy will act as a lantern with artificial lighting from inside shining out of the glazed entrance.

An angular portal entrance, framed by bold blue-coloured glass, will welcome passengers into the western ticket hall. Walls will be decorated with glass and acoustic panels made from perforated enamel steel, whereas terrazzo will be used for the floors.

At the Broadgate ticket hall, Crossrail has excavated the station box to a depth of 23m below ground level, and constructed an access passage linking the ticket hall to the London Underground station.

The project further includes the construction of a 40m-deep shaft at Blomfield Street and a 42m-deep shaft below the Finsbury Circus Gardens.

The Moorgate ticket hall construction includes the excavation of a 55m-deep shaft with reinforced concrete panels to form a box below ground.

A new 53m-long sprayed concrete lining cable tunnel, the first of its type, will be constructed 5m below ground to connect the new substation.

The construction of station platforms and ticket hall structures was completed by October 2016. Other works include the installation of glass-fibre reinforced concrete cladding for the platforms, preparation work to commence track-laying, installation of a floating track slab in the Barbican tunnels, expanding the internal structure of the Moorgate shaft, and the completion of the Blomfield Box structure.

"The stations, platforms and tunnels will be fitted with key infrastructure and architectural finishes in 2017."

The stations, platforms and tunnels will be fitted with key infrastructure and architectural finishes in 2017. Major works include laying 42km of track, and the installation of critical railway components such as platform screen doors, ventilation fans, cables, walkways, power, and signalling and communication systems.

Laing O’Rourke Construction was awarded the main construction works contract for the Liverpool Street station, while the BAM Nuttall Kier (BNK) joint venture was contracted to perform advance works, including piling and walls.

Wilkinson Eyre and Mott MacDonald were engaged to provide detailed designs for the station with assistance from London Bridge Associates.

Arup and Laing O’Rourke engaged Hawkins Brown to complete the detailed design and construction of the new station and the public realm. Hawkins Brown was supported by AVR London.

OMK Design
OMK Design specialises in the installation and production of public...
SUBSCRIBED