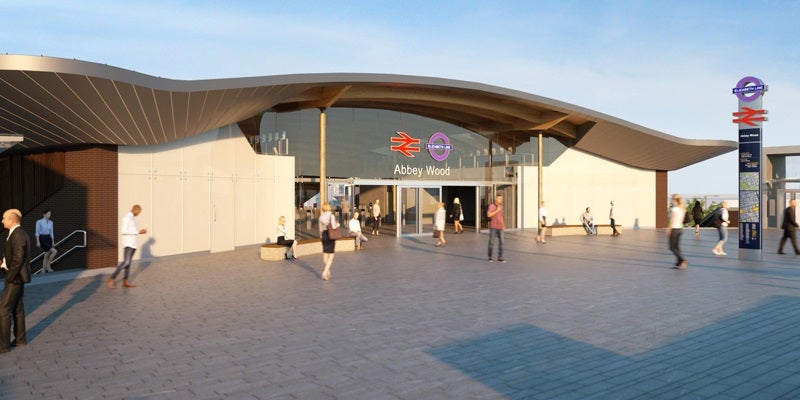 Abbey Wood railway station, located in the suburb of Abbey Wood in south-eastern London, UK, was opened in July 1849 by Southeastern Railway. The station underwent a complete overhaul and was reopened in October 2017.

The redevelopment was undertaken as the old station was too small to accommodate the increase in passenger numbers from the Elizabeth Line. Construction on the project commenced in 2013 and the old station was demolished in May 2015. The new station has a passenger capacity of 52,000 per day.

The redeveloped station was part of a regeneration scheme jointly undertaken by The London Borough of Bexley, Royal Borough of Greenwich, Crossrail, Network Rail, and TfL, in partnership with property developer Peabody.

The regeneration scheme resulted in the development of a new Sainsbury’s supermarket, 220 new homes, a new library, retail units, and a public square close to the station.

The new station is shaped similar to a manta ray, whose wings extend into canopies. Surfaced with zinc, the wing-shaped extension covers the staircases on either side.

A striking feature of the station is the timber roof measuring 50m x 55m creating an interior area of 1,600m2. The curved structure of the roof was created using a curved cross-laminated timber (CLT) deck supported by three-layered curved glulam beams, steel girders, and cruciform steel columns clad with larch. The beams run from the entrance to the platform stairways, effectively drawing people inside the station and guiding them through the building.

The station building is built over four railway tracks, with its entrance at the upper level and external staircases and lifts leading down to local shops and streets at the ground level. Two new island platforms, with a length of 260m, and two new footbridges were added as part of the project to accommodate the Crossrail and North Kent services.

The public spaces around the lower level of the station were upgraded with a granite-paved concourse for pedestrians and cyclists. The concourse is integrated with the Harrow Manorway flyover, providing a direct connection to bus services for passengers.

Early construction works on the project included the demolition of the old station, the installation of a new one mile (1.6km) section of railway track, and construction of a temporary interim station, which was completed and opened for operations in October 2014.

The construction of the roof required high-precision CNC prefabrication of timber and 30t of steel for assembling the support structure. The station building is supported by more than 100 pile foundations.

The station features a ticket office, toilets, and admin spaces, which are aligned into side spaces to give a clear view of the tracks and platforms.

The station was designed by Fereday Pollard Architects, an architectural and landscape design firm based in the UK.

The main contractor for the redevelopment of Abbey Wood Station was Balfour Beatty, an international infrastructure group based in the UK. It was awarded a £130m ($196.26m) contract in March 2013 to build the new station building and to replace two existing platforms.

VGC Group was contracted by Balfour Beatty to supply labour resources, including dumper drivers, crane controllers, slingers, and ground workers to the site in January 2014 under a £2m ($3.31m) contract.

Waterman Group, a planning and engineering design consultancy, was commissioned by London Borough of Bexley to prepare a draft construction programme and review the structural design and conduct risk assessment.

Thorn, a high-quality lighting solutions provider, worked in partnership with Anderson Green, a building services consultancy, to develop the lighting design concept for the station.

Toppesfield, a surfacing solutions provider, was contracted by Balfour Beatty to provide surfacing services for the station’s new platforms.

USL Ekspan, an engineering solutions provider, was contracted to build an expansion joint on the pedestrian concourse.