Federal Government of Switzerland, and Canton of Geneva

Expand
The CEVA rail link will connect Cornavin area of Geneva and Annemasse in France. Image courtesy of BG.
The consortium of Chantiers Modernes Rhone-Alpes, Soletanche Bachy France and Sif Groutbor will construct the diaphragm walls. Image courtesy of Soletanche-Bachy Group.
The new rail line will also be a primary element of the railway network between Switzerland and France. 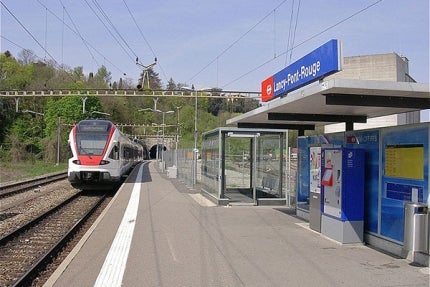 The 16km CEVA (Cornavin-Eaux-Vives-Annemasse) rail link is part of the Mobility 2030 Master Plan of Swiss Canton Geneva, which aim to enhance metropolitan transport system and intermodal links. The CEVA project is the outcome of a joint venture involving the Canton of Geneva and SBB/CFF (Swiss Federal Railways).

"Construction work of the 16km CEVA rail link got underway with a groundbreaking ceremony in November 2011."

Construction work of the 16km CEVA rail link got underway with a groundbreaking ceremony in November 2011. Approximately 14km of the 16km railway link runs through Switzerland.

The link will connect Cornavin area of Geneva and Annemasse in France. Travel times between Cornavin and Annemasse will be reduced to just 20 minutes, upon completion of the construction.

The CEVA railway line project was planned more than 150 years ago, but could not be realised because of several disputes and controversies. The project finally got approval in 2008, but the start of construction was delayed due to opposition from the community in the vicinity of the rail line. They argued that the construction will gravely impact residential homes.

The issue finally went to the Federal Administrative Court of Switzerland where, pleas of all the residents excepting those residing at Champel Tunnel were dismissed. The Federal Court decided that the rail link work at Champel Tunnel should remain suspended.

Purpose and benefits of the CEVA rail link

The CEVA rail link is planned to meet the projected increase in the need for public transportation in Geneva by 2020. The population within a radius of 40km of Geneva is approximately 910,000 and it is projected to rise to about 1.1 million by 2020.

The rail link will also strengthen the relationship between France and Switzerland from both economic and social perspective.

The rail link will serve as an alternative for usage of private cars, as it will providing a fast and reliable mode of transport connecting Geneva with the whole region.

The project will not only reduce dependency on personal automobiles, but also enable development of a green belt in the region.

The CEVA railway link will be predominantly in the form of a subway as more than 60% of the line will be underground. Covered tranches and gas stations will be constructed at ground level.

The construction at Three Oak is chiefly focused on burying the existing line by means of a covered trench. Also, non-motorised modes of transport will be provided above the ground.

The CEVA rail link will connect a total of seven stations including the Cornavin and Annemasse stations. In addition, the railway link will pass through 3.7km and 3.6km of tunnels and covered trenches, respectively.

The project includes four major elements. The first element is the refurbishment of the SBB (CFF) Line that connects Cornavin Station and Bachet-de-Pesay. The second element is the construction of a new CFF Line crossing River Arve and running below Champel Commune through a tunnel.

The third part is the conversion of a SNCF single track line linking Gare des Eaux-Vives and the Switzerland-France border into an underground double-track line. The last element focuses on upgrading the SNCF Line connecting the border and Annemasse.

Contractors involved with the CEVA project

Katzenberg Tunnel is a railway tunnel constructed on the new Rhine Valley railway line extension. It is located on Mannheim-Karlsruhe-Basel railway line, running between Mannheim in Germany and Basel, Switzerland via Heidelberg, Karlsruhe and Freiburg in Breisgau. The tunnel is built in order to replace the old freight route.

Soletanche Bachy France and Sif Groutbor were awarded a contract for the construction of two segments of the CEVA railway line, at Val d’Arve cut-and-cover tunnel and the Eaux-Vives underground station.

A contract for work on six sections of the CEVA rail link, valued at approximately $17.3m, was awarded to a consortium led by Marti Tunnelbau and Marti Construction.

GEB consortium was selected to provide security engineering services for the project.

The construction began on the CEVA link in January 2012. The work between Trois-Chênes and the French border commenced in March 2013.

Diaphragm walls of 63,000m² and 27,000m² will be constructed at the Franck Thomas cut and cover tunnel and the La Gradelle cut and cover tunnel, respectively. The Champel Tunnel will be excavated by using the continuous pipe screen technique. In addition, a steel bridge with a length of 84m will be constructed across River Arve, as a part of work on the second section.

The next section involves the construction of an underground station, Champel-Hôpital, using the cut-and-cover construction method. The installation site will be prepared with a 6m tall nail wall and a 1km access road. A total of 16 buildings will be demolished to provide space for the new Eaux Vives station.

Work at the ground level is primarily focused on Lancy-Pont-Rouge, Carouge-Bachet, Champel-Hopital, Geneve-Eaux-Vives and Chene-Bourg, which will be the new stations on the Cornavin-Annemasse rail link. The cover plates and diaphragm walls of the stations are above the ground in order to make sure that the disturbance caused to people residing in the vicinity is minimal.

The Federal Government of Switzerland is providing approximately 57% of the funds necessary for the execution of the CEVA project. The balance 43% will be provided by the Canton of Geneva.