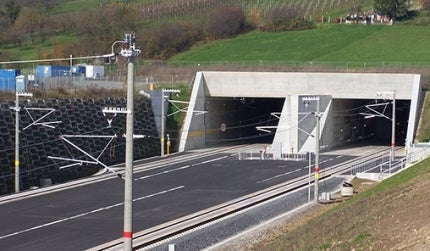 Katzenberg Tunnel is a railway tunnel constructed on the new Rhine Valley railway line extension. It is located on Mannheim-Karlsruhe-Basel railway line, running between Mannheim in Germany and Basel, Switzerland via Heidelberg, Karlsruhe and Freiburg in Breisgau. The tunnel is built in order to replace the old freight route.

Katzenberg Tunnel is the biggest individual element constructed on the extension. It stretches 9,385m in length and is the longest two-tube tunnel and third longest tunnel in Germany, as of 2012. It was considered as one of the most advanced railway projects in Europe when it commenced in August 2003.

The tunnel consists of two single track tubes designed to handle trains travelling with speeds of 250kmph, and will maximise the travelling speed on the Rhine Valley Railway.

Most of the Katzenberg Tunnel was completed by December 2011 but the opening was postponed until December 2012. Trial tests of the tunnel were conducted from July 2012. Sample rescue exercises were held by professionals in November 2012.

The tunnel was opened to traffic by officials of the State and Federal Transport Ministry on 4 December 2012. Two ICE-T train sets travelled through the parallel tunnels marking the inauguration.

Katzenberg Tunnel was proposed to ease congestion on one of the main north south European rail routes. Initially the trains used to travel with a speed of 70kmph on uneven Rhine river ranges situated after Swiss city Basel.

The project included the construction of twin tube tunnel under a bushy hill located between Bad Bellingen and Efringen-Kirchen. The total cost of construction of the tunnel and its connection to the existing network was estimated to be around €610m ($807m).

The approval and planning process of the project were completed in November 2002. The construction of the road leading to the site started in December 2002. Contracts for the construction were awarded in the summer and preparatory construction work begun in August 2003. A ground-breaking ceremony was held in October 2007.

The structure of the tunnel consists of two 8,984m-long parallel single rail track tunnel tubes. The two tubes are connected to each other at regular intervals of 500m by means of interconnecting galleries with inbuilt technical operating rooms. These galleries contain cross passages with rescue locks.

The inner and outer diameters of the tunnel are 9.6m and 10.8m respectively. The parallel distance between the two tunnel tubes varies from 16m to 26m. Vertical ventilation shafts of 80m in length and an inner diameter of 6m are installed for all tunnel alignment at their highest points. A 65m-high ventilation shaft is included in each tunnel at the gradient’s highest point.

The tunnel has two cut-and-cover sections with lengths of 286m and 115m. It has 19 cross passages and 8,968 rings. Maximum and minimum covers of the tunnel are 120m and 10m respectively. Each segment of the tunnel is 2m wide and 0.6m thick.

France is rapidly developing a world class high speed railway network, and the grand plan has been enhanced by the approval of a funding package worth €2.3bn for the first phase of the TGV Rhine-Rhone high speed line.

The tunnel site mainly consists of clay, marl, limestone and sandstone deposits. The route passes under the ground water storeys of the mountain, which turned out to be a major challenge in constructing the tunnel. The tunnel had to manage an over burden of up to 120m and water pressure up to nine bar. Water leaks had to be taken care of as a small leak would create a crack, which in turn would spoil the tunnel construction.

Two tunnel conveyor belts, each 800m wide and 9,000m long, were used for spilling out the excavated materials from inside the tunnel.

The shell interior lining was built in segments by reinforced concrete. Customised construction techniques were used for building the cross passages and ventilation shafts. Rail road vehicles specially designed for operation at the construction site were used to move the finished ring segments.

The gap between the segments and the tunnelled surface was filled with grout. The joints were removed after hardening of these segments. In case of any cross cuts, a special type of steel was inducted into the structure to make it firm. An open cut method was applied for constructing 115m rectangular track tubes at the tunnel ends.

The installation of overhead power lines was completed in May 2012. The tunnel was installed with locks, emergency power supply, communication systems and fire-fighting technology after tunnelling.

An information centre was constructed for public consultations and will remain open till mid 2013. The tunnel blasts were managed by making cross section of the tubes narrow towards the centre of the tunnel. The tunnelling involved excavation of approximately 1.8 million m3 of solid masses and 2.45 million m3 of loosened masses.

The tunnel is installed with an automatic train (LZB) system and has no conventional signals. A total of 12 virtual block signals are installed at regular intervals at a distance ranging between 0.8km and 1.7km.

Contractors involved with the construction of Katzenberg tunnel

"Sample rescue exercises were held by professionals in November 2012."

The German national railway company Deutsche Bahn awarded a contract to the joint venture of Wayss & Freytag Ingenieurbau, Ed. Züblin, Marti Tunnelbau and Jäger Bau for the construction of the tunnel in July 2003.

Rowa was awarded a contract for the supply of concrete. WEBAC provided solutions and services for prevention of cracks in the tunnel and supplied suitable injection system which ensures eliminating such irregularities.

Bad Vilbel (formerly Lahmeyer International) was responsible for framing planning methodologies for construction of the tunnel. Herrenknecht supplied the tunnel boring machines. Marti Technik was the designer, manufacturer and supplier of the conveyor belt.

The Melbourne Metro Rail Project involves the construction of a 9km-long tunnel within Melbourne, Australia, connecting the Sunbury and Dandenong…

London’s Waterloo station is one of the busiest railway stations in the UK, handling more than half a million passenger…

11 Jan 2021
Registration is disabled.
We use cookies to ensure that we give you the best experience on our website. If you continue to use this site we will assume that you are happy with it.ContinuePrivacy policy