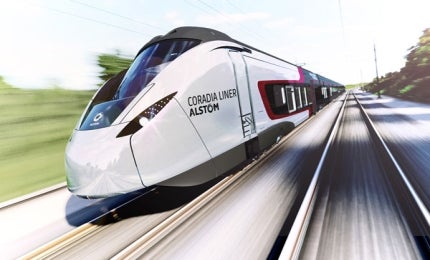 The V200 is a new train in the Coradia series of rolling stock manufactured by Alstom Transport, which will run on the main railway lines of France. The Coradia trains are intended to replace the current mainline intercity trains.

Alstom unveiled the V200 to the public in June 2014 at the European Mobility Exhibition for Public Transport expo held in Paris. The train runs on either electric or a combination of electrical and thermal power (dual mode) at speeds up to 300km/h and can carry up to 900 passengers.

Development and production of the new Coradia train

The Coradia V200 is developed to replace the existing intercity rolling stock Corail and will operate on key routes, such as Paris-Clermont-Ferrand, Paris-Orléans-Limoges-Toulouse and Paris-Caen-Cherbourg. The project has contributed to the continuation over 4,000 jobs within Alstom and across the French rail sector.

"The Coradia V200 is developed to replace the existing intercity rolling stock Corail and will operate on key routes in France."

The new train is developed and manufactured in France, primarily at six of Alstom’s sites. The motors are built in Ornans, bogies in Le Creusot, traction chains in Tarbes and the on-board computer system in Villeurbannel, whereas the design and assembly are carried out in Saint-Ouen and Reichshoffen.

The design of the Coradia Liner V200 is based on the modular Coradia trains, which have run for more than four billion kilometres in Europe. The highly modular design of the new train provides the operators with the benefits of tailor-made cars, which can be reconfigured to specific needs and requirements, especially during seasonal fluctuations or for use in high-density routes.

The new train is lighter than the Corail trains and consumes 30% lesser energy, making it eco-friendly. It is based on European Rail Traffic Management System (ERTMS) technology and can also operate on conventional networks. Its low-floor height and platform-height double doors allow full accessibility and make it 100% consistent with the STI PMR4 standard for people with reduced mobility. The platform-height doors also enable passengers to board or depart from the train safely and easily.

Bombardier OMNEO is a new electric multiple unit (EMU) double-deck train, which was unveiled in September 2013 by SCNF.

The train features a distributed traction system, which enhances the braking and acceleration without any increase in the travel time. Care has also been taken in providing acoustic comfort inside the train. The exterior and front lights are designed to look stylish and appealing. The tapered front improves aerodynamic performance of the train. The large windows provide panoramic views to the passengers.

The Coradia Liner V200 features reclining seats fitted with reading lights and electrical sockets, providing a high level of comfort to passengers on long trips. The interiors are spacious with wide corridors in the hospitality and travel areas, allowing free movement of passengers onboard. Service areas such as a restaurant, bar, hospitality areas and children play areas make longer journeys more pleasant and convenient.

Coradia is a series of regional trains manufactured by Alstom to suit the specific needs of various regions. The trains are environmentally friendly and highly recyclable. More than 3,000 Coradia trains are operating in a number of European countries, including Denmark, Spain, Sweden, the Netherlands, Italy, France, Portugal, Germany and Luxembourg.