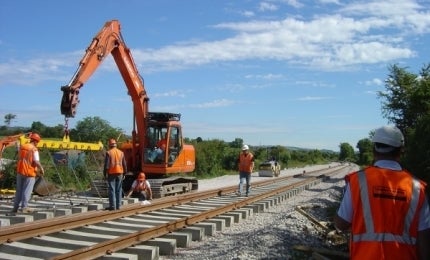 The Coleraine to Londonderry line, also known as Derry-Coleraine line, runs from the town of Coleraine to Derry in Northern Ireland. It is a single-track line running between Mossley West and Londonderry Waterside stations, with passing loops at Antrim, Ballymena, Ballymoney, Coleraine, Castlerock and Bellarena.

Line operator Translink NI Railways initiated an upgrade of the railway line in July 2012, with the aim of enhancing passenger traffic movement on the Northern corridor rail link. The project is funded by the UK Department for Regional Development (DRD).

The Coleraine-Londonderry line is being upgraded in three phases. The first phase of construction was initiated in July 2012 and completed in March 2013. It included a complete relay of two rail sections located between Coleraine and Castlerock, and Eglinton and Londonderry, and an extension of other rail sections through the conversion of the existing jointed track into continuous welded rail.

“The project is funded by the UK Department for Regional Development (DRD).”

Phase one also included the essential bridge repairs and elimination of wet spots, and refurbishment of the 11-span lifting bridge over the River Bann in Coleraine and replacement of the two-span Pottagh Bridge.

The first phase of construction used approximately 5,600t of new rail and 100,000t of ballast, and cost £26.7m ($41.62m). It was completed in compliance with CEEQUAL environmental standards and practices.

Following the completion of Phase one, the number of passengers accessing the railway line increased by 12% in 2014/15 with more than two million passenger journeys a year.

The second phase of construction was initiated in June 2015 and included the re-signalling works and construction of a passing loop at Bellarena on the Derry-Londonderry railway line. The signalling upgrades enhanced the hourly services between Derry and Belfast.

Two new platforms were opened in March 2016 at the Bellarena Train Station as part of the second phase works. Other major works completed were the construction of a platform extension at Castlerock, a new rail passing loop, and installation of cable ducts at Castlerock and the Derry-Londonderry stations.

The third phase, expected to be completed by 2021, will involve complete relay of the track between Castlerock and Eglinton.

McLaughlin & Harvey was awarded a contract to perform track safety improvement works between Castlerock and Derry line. The joint venture of Bam Contractors and FP McCann was contracted to provide full track relay between Coleraine and Castlerock, as well as Eglinton and Londonderry.

The project is an extensive programme undertaken by the UK’s Network Rail to modernise its existing infrastructure to provide faster and reliable services.

Sersa UK was awarded a contract to complete welding of 2,220 rails and the stressing of the constructed track, as well as the installation of the insulated block joints (IBJs), and thermic welding. The scope of work included replacement of the rails along a 29km section of the Belfast-Derry route.

McLaughlin & Harvey was contracted to construct a 1km-long passing loop and associated platforms, and perform culverting works at Bellarena in June 2015. The contractual scope also included platform works and track renewal at Castlerock, and cable ducting works around Londonderry station.

Babcock was contracted in June 2015 to carry out the work on the signalling scheme in the second phase of construction.