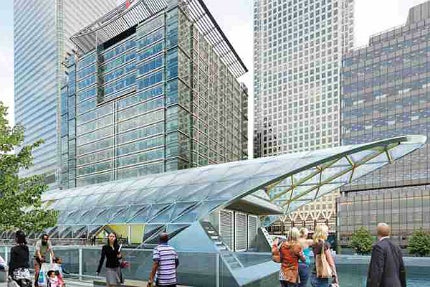 Canary Wharf station in London will be one of the largest Crossrail stations when completed. The station is expected to serve 25 million passengers a year. Its opening will reduce the journey time from Canary Wharf station to Heathrow, Farringdon, Bond Street, Woolwich and Abbey Wood stations to just 39 minutes, eight minutes, 13 minutes, seven minutes and 11 minutes respectively.

Crossrail started construction of the new station at Canary Wharf in May 2009. The station is expected to be completed in 2018.

Canary Wharf Group (CWG) is the lead contractor for the design and construction of the station. The estimated investment on the station project is £500m ($765m), out of which £150m ($230m) is contributed by CWG.

"Crossrail started construction of the new station at Canary Wharf in May 2009."

The station is being built in the waters of the North Dock. It will be located below ground level, with proposed retail stores and park areas constructed above the ground level of a six storey building.

Retail stores of 100,000ft² will be constructed on four of the six storeys. A landscaped park, a restaurant and a community facility will be located on the top floor.

The ground level will be connected to retail stores and restaurants by a bridge.

The station will feature six lifts and 19 escalators to facilitate passenger movement.

Preliminary works of the new station construction included removal of 100 million litres of water and 150,000m³ of material excavated from the dock. The construction will utilise 16,500t of reinforced steel and 156,000m³ of concrete.

The final fitting of the station structure is in progress for the scheduled completion by 2015.

Briggs and Forrester Engineering Services received a contract from Canary Wharf Contractors, a subsidiary of CWG, in July 2012. The scope of the contract includes mechanical and electrical services, power and pump systems, and cooling and lighting services.

Foster + Partners are the design architects for the project. Arup Engineering acted as the lead designer and structural and building services consultant. It also provided engineering services for the 100,000ft² retail space and the rooftop park.

Gillespies provided the design for the park scheme and landscaping design for the rooftop park. Laing O’Rourke received a contract from CWG to provide civil engineering works for the station.