Expand
PRIMOVE is Bombardier's path breaking clean technology application for rail and road transportation.
PRIMOVE offers catenary-free operation and is suitable for rail as well as road transportation.
The PRIMOVE pilot project was carried out on trams from a section of line three to exhibition grounds in Augsburg, Germany. 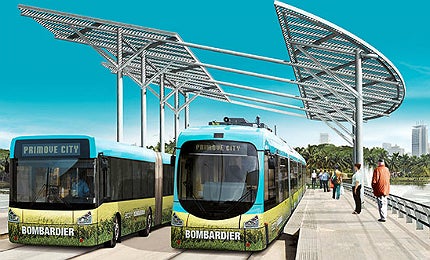 PRIMOVE Light Rail Trams are designed based on the PRIMOVE Solution from Bombardier. PRIMOVE is a path breaking technology that makes modern urban transport cleaner and more convenient than ever before.

The trams use energy efficient technology to preserve the environment. The urban transport technology also cuts CO2 and noise emissions. The technology is compatible with other transport systems, such as busses and cars too.

The wireless charging technology of PRIMOVE eliminates the constraints of complex infrastructures such as wires and plugs. The PRIMOVE system provides an appealing and affordable alternative to unpractical battery swapping technique and reduces the ownership and maintenance costs.

Trial tests of the PRIMOVE induction powered tram were completed successfully on the Augsburg tram network in June 2012.

Design and development of the light rail trams

The new unique PRIMOVE Light Rail Trams designed based on the Bombardier PRIMOVE e-solution liberate trams from overhead power supplies. The contactless inductive power transfer system installed beneath the track supplies electric power to all its components and eliminates the need for an overhead power supply system.

The PRIMOVE Light Rail Tram was formally unveiled at Bombardier’s Bautzen factory in January 2009. It underwent extensive examination with PRIMOVE components for several weeks at the site.

The system was first installed on a 0.8km branch of Augsburg Line 3, serving the city’s exhibition centre in May 2010, to demonstrate the technical and electromagnetic capabilities of the vehicle. Tests on the 200kHz induction loop spur line were completed in June 2012.

Features and advantages of the PRIMOVE system

"Wireless charging technology of PRIMOVE eliminates the constraints of complex infrastructures such as wires and plugs."

The trams can be operated in heritage protected areas without altering their natural aesthetics. They also increase safety of pedestrians and bikers as they use contactless power supply.

The electric system proves to be advantageous as it doesn’t emit any gases or particulates, making the urban environment cleaner and pleasant with good air quality.

PRIMOVE vehicles charge quickly compared to conventional ones and reduce lengthy waiting periods. The stops on the route can be transformed into charging centres, eliminating disturbances and delays in timetable. The vehicles can be adapted to any city with any topography and are reliable under adverse environmental conditions, such as snow, ice and rain.

The charging process is simple, driver friendly and completely automated. No separate training is required for the drivers for charging, which ensures hassle free operations.

The installation of PRIMOVE system is very easy as the prefabricated and tested modules can be directly integrated into the ground. The existing infrastructure can also be easily converted as the system contains fewer components. The maintenance costs of the infrastructure are thus significantly reduced and long reliability is ensured, as the system is contactless, reducing wear and tear of components.

The PRIMOVE tram system is connected with Bombardier MITRAC energy saver system which permits power optimisation for peak performance. The systems store energy during braking in double layer capacitors and feed it back to the power system.

The PRIMOVE system can provide a power output varying from 100kW to 500kW depending on factors including length, the number of cars, geographic conditions and the range of application. It is a typical light rail vehicle with length varying from 30m to 42m, gradient up to six percent and speed up to 50kmph running on 270kW power.

The whole PRIMOVE system constitutes wayside components and onboard components. Components are divided based on the design that allows maximum structural integration and energy transfer efficiency.

The wayside components are completely buried underneath the ground and can also be covered with asphalt or concrete. The primary cable segments are installed just beneath the road surface and transfer the power to the vehicles. The electromagnetic interference is eliminated by the magnetic shielding installed under the primary winding.

The segment is switched on by the Detection and PRIMOVE Segment Control (VDSC) cable which senses the presence of the vehicle above the segment.

The system control and diagnostics information is provided by a Supervisory Control and Data Acquisition (SCADA) interface. The conversion from DC to AC voltage is made by the inverters installed in the system. Feed cables in the system feed the required DC power to the inverters.

The onboard components are fitted to the PRIMOVE light rail tram’s frame. A pick-up together system and a compensation condenser are combined to form the PRIMOVE Power Receiver System which is installed underneath the vehicle. The system converts the primary winding’s magnetic field into alternating current, which is converted into DC using an inverter.

The cable segments from the source are detected by the Vehicle Detection and PRIMOVE Segment Control (VDSC) antenna installed in the vehicle and switching is processed.

The phenomenon doesn’t essentially require contact between the two systems. The generated electric current is used for the propagation of the vehicle. The primary coil is extended in a loop along the track so that the secondary coil in the vehicle can receive power across the whole length of the loop.

MOVIA metro cars, which are manufactured by Bombardier Transportation to provide a safe and cost-efficient service, are currently operational in a large number of metro rail networks across the globe.

The Flexity family of light rail vehicles (LRVs) is manufactured by Bombardier Transportation.