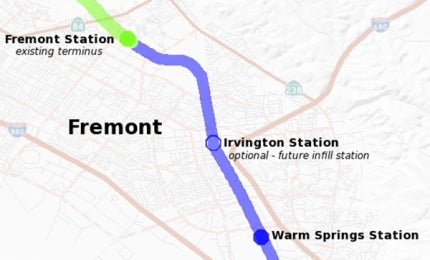 US Federal Transit Administration (FTA) granted a record of decision for the BART Warm Springs extension project in October 2006. The project was proposed to be constructed through two contracts, namely the Fremont Central Park Subway Contract and the Line, Track, Station and Systems Contract (LTTS).

Once operational, the $890m extension project is expected to increase the transit ridership by 4,700 daily trips.

The Warm Springs Extension alignment runs parallel to portions of the Union Pacific (UP) freight railroad corridor, in addition to Interstates 680 and 880 in southern Alameda County.

"Once operational, the $890m extension project is expected to increase the transit ridership by 4,700 daily trips."

The initial segment of the extension line begins on an embankment at the south end of the existing elevated Fremont BART Station and then crosses over Walnut Avenue on a new overpass structure before descending into a cut-and-cover subway just north of Stevenson Boulevard. The subway track runs beneath the Fremont Central Park before emerging on to surface on the east edge of the park.

The line then passes over Paseo Padre Parkway on an overpass structure and runs southward at-grade, passing under a grade-separated Washington Boulevard. The track finally runs into the Warm Springs/South Fremont Station on a new overpass structure over South Grimmer Boulevard.

The Warm Springs / South Fremont station under construction in the Warm Springs District of Fremont will comprise an at-grade island platform and an overhead concourse.

The extension project also includes an option to build a station at Irvington between Fremont and Warm Springs / South Fremont stations, which is expected to have a daily ridership to 9,100 trips by 2025.

Various existing structures along Warm Springs Court were also removed or modified under a separate contract awarded in October 2011, in preparation for the construction of the BART track way south of the Warm Springs / South Fremont Station.

Works under the LTSS design-build contract include the construction of the trackway, tie-in at the Fremont Station, the new Warm Springs/South Fremont Station and a parking lot.

The joint venture of Shimmick and Skanska was awarded a $136m contract for the construction of the Fremont Central Park Subway in May 2009.

The LTSS design-build and construction contract for the extension project was awarded in 2011 to Warm Springs Constructors, a joint venture of Kiewit Corporation and Mass. Electric Construction (MEC).

The detailed design for the station is provided by HNTB, the architect for the Warm Springs Constructors design-build team. Parikh Consultants was engaged as the geotechnical engineering consultant for the execution of the LTTS contract.

Livermore-based Parc Services were engaged in October 2011 for the demolition of structures along the Warm Springs Court for the construction of the tail tracks of BART Warm Springs Extension.