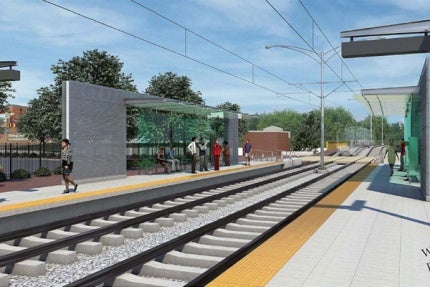 The Baltimore Red Line is a 14.1 mile (22.7km) east-west light rail transit (LRT) line proposed by the Maryland Transit Administration (MTA) that will run from Woodlawn in suburban Baltimore County to Bayview in east Baltimore City.

First phase preliminary engineering for the LRT project was completed in June 2012 and federal approval for the project’s environmental plan was received in March 2013.

Construction is expected to begin in 2015 and completion is expected in 2022. The new LRT line will add to the Baltimore subway and light rail system, the city’s existing urban mass transit network.The average daily ridership of the line is projected to reach 54,000 by 2035.

Estimated to cost approximately $2.6bn, the Red Line project will create more than 9,800 jobs during the design and construction phases.

The project will include the construction of 15 surface and five underground stations, six park-and-ride facilities and a rail car storage and heavy maintenance facility at Calverton Road.

The LRT line will have 38 light rail vehicles running at a maximum design speed of 55mph.

Traction power substations and an overhead catenary system will be built along the alignment to supply electricity for the vehicles running on the new line. The underground section of the Red Line will be installed with mechanical ventilation systems with fans, air plenums and air shafts.

The 14.1-mile LRT line with a combination of surface, aerial and underground tunnel alignments was selected as the locally preferred alternative (LPA) out of 12 options considered for the mass transit project. Also considered was transportation system management (TSM) which called for an upgrade to the existing transit system without building a new transit way, as well as a bus rapid transit (BRT) system, which proposed the use of rubber-tired buses.

"The project will include the construction of 15 surface and five underground stations, six park-and-ride facilities and a rail car storage and heavy maintenance facility."

Approximately three miles of the LRT line will be within Baltimore County. The transit line in this section will either run parallel or across the Interstate Highway 70 and US Route 40. The line will then enter a 1.3 mile long tunnel via a portal near the intersection of Cooks Lane/Forest Park Avenue/Security Boulevard, after which it runs for about 3.3 miles through tunnels in downtown Baltimore along Edmondson Avenue, Franklin Street and the US 40 lower-level roadway. However, the transit route on the east end will use the Norfolk Southern railroad right-of-way.

The operations and maintenance (O&M) facility for the LRT line will feature 11 parcels spread over 20.8 acres in Baltimore City along the south side of US 40/Franklin Street on Calverton Road between Franklintown Road and Warwick Avenue.

The O&M facility is expected to have a storage capacity of 34 light rail vehicles and a shop capacity of ten vehicles. It will also feature an outdoor storage facility for track and rail systems materials and equipment.