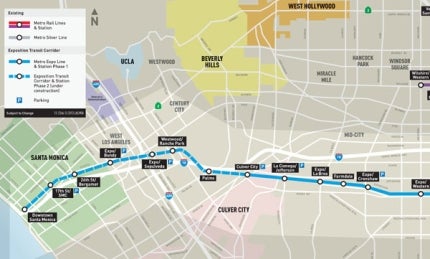 The Exposition Transit Corridor is a 15.2 mile-long light rail transit system (LRT) between downtown Los Angeles and Santa Monica, California, US. The LRT is being developed in two phases; the first phase being from Los Angeles to Culver City and the second phase will extend from Culver City to Santa Monica.

Construction of the first phase of the LRT began in 2006 and was completed in 2012. The second phase, also known as Expo Light Rail Line Phase 2, is a 6.6 mile (10.6km) extension of the first phase of the metro rail system. Works on the Phase 2 expansion began in 2012 and are expected to be complete by 2015. It will add seven new stations and three park-and-ride areas with 580 parking spaces.

The second phase is managed by the Exposition Metro Line Construction Authority and the design-build contract was awarded to a joint venture of Skanska USA and Rados. The operations will be handed over to the Los Angeles County Metropolitan Transportation Authority upon completion of the construction. The estimated budget for the extension is $1.5bn.

Upon completion of Phase 2, the estimated travel time from downtown Los Angeles to Santa Monica will be 46mins. The combined ridership on the two phases is expected to reach 64,000 a day by 2030.

Details of the Exposition Transit Corridor

The Expo Light Rail line is the first transit corridor between downtown Los Angeles and Westside. The Exposition Metro Line Construction Authority was formed in 2003 and is responsible for the completion of the $2.5bn project, which is funded through Measure R (voter-approved sales tax revenue).

The Expo Line aims to provide a faster and reliable transportation system to the residents of Los Angeles. It will reduce commuting time and improve the mobility and transportation system capacity of the metropolitan area. Running parallel to the I-10 Freeway, the rail line serves as an alternative to the freeway and the major east-west arterials.

The Regional Connector Transit Corridor is a underground light-rail system that will connect various lines in downtown Los Angeles, California, US.

The final environmental impact statement for the project was circulated in December 2005 and a record of decision was issued by the US Federal Transit Administration in February 2006.

The Phase 2 extension will run along the old Pacific Electric Exposition right-of-way to 4th Street and Colorado Avenue in downtown Santa Monica.

The Phase 2 will also see the construction of an exclusive bikeway that will go through the right-of-way to 17th Street in Santa Monica, which will also connect to the existing bikeway at Santa Monica. Bike racks and lockers will be made available for passengers at every station.

The new stations will be landscaped with native plants and palm trees, while gingko trees will be planted along the corridors. Artwork will be displayed above the station gateways and over the seating areas to enhance the commuter experience. The Santa Monica station will feature a signature sculpture.