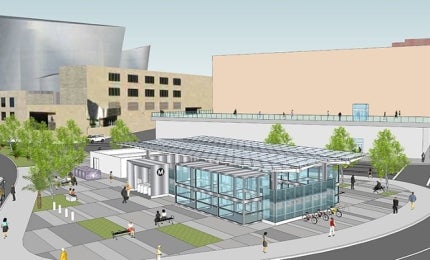 The Regional Connector Transit Corridor is an underground light-rail system that will connect the Metro Gold Line Little Tokyo/Arts District Station with the 7th Street/Metro Centre station in downtown Los Angeles, California, US. The corridor will connect the existing Blue and Expo lines with the Gold line and Union Station, allowing passengers to transfer to all the existing lines bypassing Union Station.

"The US Federal Transit Administration granted $670m through its Capital Investment Grant programme to LACMTA towards the project in February 2014."

The project will be developed at an estimated cost of $1.42bn. The Los Angeles County Metropolitan Transportation Authority (LACMTA) approved the project in 2014.

The corridor is expected to be completed in 2020 and will initially handle approximately 60,000 trips each working day.

The three newly proposed stations are 1st Street/Central Avenue Station, 2nd Street/Broadway Station and 2nd Place/Hope Street Station. Currently located at the intersection of 1st and Alameda Streets, the Arts District Station in Little Tokyo will be moved underground and across the street to the south-east corner of the 1st Street and Central Avenue Station.

All the three stations will provide a safe and convenient access, include public art components and feature state-of-art design.

The Regional Connector Transit project would benefit the residents of Los Angeles County as it eliminates the need of cumbersome transfers from the light rail to Purple Line or Metro Red subway system or vice versa.

The project will improve the quality of commute by offering a one-seat ride from Long Beach to Azusa and from East Los Angeles and the San Gabriel Valle to Santa Monica, thus significantly reducing the travel time.

It will serve as an alternative to the congested roadways and traffic gridlock of Los Angeles and offer its residents a convenient access to jobs, education and many other opportunities across the metropolitan area. The project will also provide significant economic development and environmental benefits.

The Regional Connector will provide continuous service between the lines and also connect other rail lines through the 7th Street/Metro Centre station, thus providing easier access to both local and regional destinations.

The US Federal Transit Administration (FTA) granted $670m through its Capital Investment Grant programme to LACMTA towards the construction of the project in February 2014.

The US Department of Transportation will further provide $64m and a loan of $160m through the Transportation Infrastructure Finance and Innovative Action (TIFIA) programme. State and local sources are expected to fund $1.4bn.

The project also receives partial funding from the Measure R, a half-cent sales tax increase approved by voters in 2008.

The LACMTA awarded a $927.2m contract to design and build contract for the project to Regional Connector Constructors, a joint venture of Skanska USA Civil West California District and Traylor Brothers.