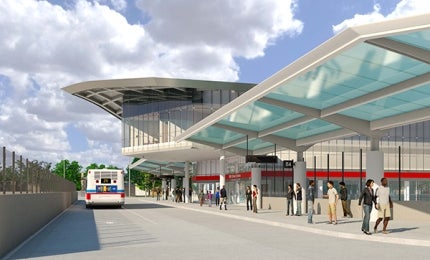 Chicago Transit Authority (CTA) is reconstructing the 95th Street Terminal that serves as the southern terminal station for Red Line, CTA’s busiest rail line in Chicago, US. The $240m project will reconstruct the entire facility, which was built in 1969, into a signature transit hub. Besides delivering an expanded rail terminal, the facility will feature an integrated bus terminal capable of serving 1,000 buses a day.

The 95th Street Terminal is the fourth busiest CTA rail station connecting commuters to 13 CTA and five Pace suburban transit bus routes in the city. The project will include the construction of two new station houses fronting along 95th Street, while expanding the rail and bus terminals.

"Besides delivering an expanded rail terminal, the facility will feature an integrated bus terminal capable of serving 1,000 buses a day."

Details of the 95th Street terminal

The existing 95th/Dan Ryan terminal is the southern terminus of the CTA Red Line in Chicago, the third most populated city in the US. It comprises a train terminal and an integrated bus terminal.

The terminal is surrounded by a bus bridge on the North, 95th Street on the South, State Street on the East, and Lafayette Avenue on the West. The 9.4 mile Dan Ryan Branch of the CTA Red Line ends at the 95th Street Terminal, while the bus terminal is accessed on average by approximately 20,000 passengers a weekday .

The terminal improvement project will be constructed over the median of the Dan Ryan Expressway in the Roseland community, Chicago. The new terminal will start at the north-westernmost point at 94th Street and South Lafayette Avenue and pass through South Lafayette Avenue before finally intersecting with the South State Street.

The new station design includes contemporary architecture with glass and steel canopies along with light-filled, glass-enclosed structures. Bus lanes will be widened and the spacing between bus bays will be increased resulting in lesser congestion.

Pedestrian access to the terminal will be provided from both the north and south sides of 95th Street, as well as through an overhead pedestrian bridge crossing over the 95th Street. With wider sidewalks and larger waiting areas, the new station will provide a safer and more accessible pedestrian environment.

The works will include the addition of new bus bays, widening of customer waiting areas, a new terminal entrance and exit, as well as pick-up / drop-off spaces for disabled riders.

Roughly 2.3 acres of land will be purchased on the eastern side of the project area along the State Street and 95th Street, from nine separate owners.

All Aboard Florida High-Speed Rail Project, US

All Aboard Florida is a 235-mile (378km) high-speed intercity passenger rail project being developed in Florida, US.

The terminal improvement project will complement two underway projects namely the Dan Ryan track renewal project and the Red Line extension project. The track renewal at Dan Ryan will include repair works at the 95th Street Terminal, replacement of rails, ties and ballast, as well as drainage improvements between the State Street Subway Portal and the 95th Street Terminal.

The Red Line extension project is a proposed 5.3 mile extension starting from the 95th Street Terminal station to the 130th Street. Three new intermediate stops near 103rd, 111th and 115th Streets will be provided along with the construction of a new terminal station near 130th Street, as part of the project.

A joint venture comprised Illinois-based Walsh Construction and Chicago’s Two in One Contractors was selected as the construction manager for the 95th Street terminal improvement project in October 2013.

PFM Group acted as the financial advisor for CTA for the terminal improvement project.