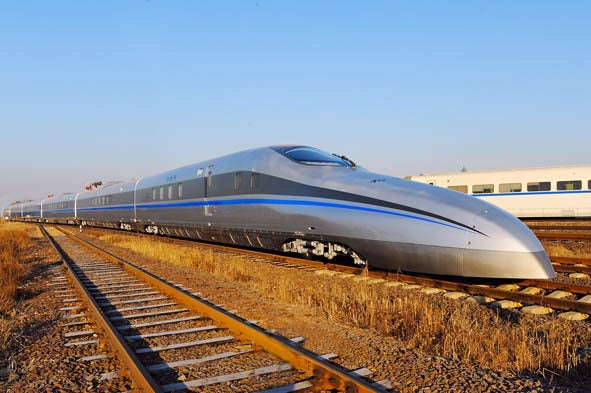 The six carriage train has been designed and produced by CSR’s Sifang Locomotive & Rolling Stock, a subsidiary based in the coastal city of Qingdao in Shandong province.

"Its launch has not only led to the emergence of a new technical platform for faster bullet trains in China, but also laid a solid foundation for the globalisation of bullet trains," Yunshuang continued.

The head of the locomotive will be inspired by a Chinese sword with a wedge structure, while the tail will be of rocket shape helping to decrease resistance and drag force.

The light weight of the train helps increase its rigidity by 22.7%, while bogies solve complex coupling relations among multiple systems due to the increase of speed through cyclic and optimal matching of system parameters, the company said.

The traction system in the locomotive has been newly developed, which has a maximum drawing power of 22,800KW, compared with 9,600KW for the CRH380 trains now in operation on the Beijing-Shanghai high-speed railway.

CSR is planning to conduct comprehensive tests at the national engineering laboratory of bullet trains, following which it will be put into operation.

The company introduced the CRH380A in December 2010. It reaches a speed of 486km/hr and is now being used on the Beijing-Shanghai high-speed railway.