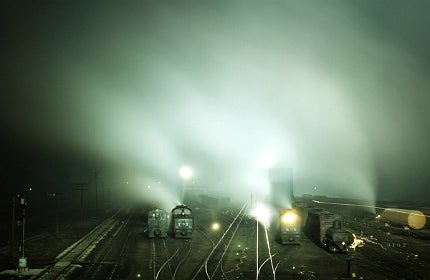 In the rail sector, as in most other traditional heavy industries, major technological crossroads usually come only once in a few decades. These changes, which often mirror the fundamental conservatism of many manufacturing industries, usually take place over years, rather than happening overnight.

In terms of rail fuel and propulsion systems, the last major shift was in the middle of the 20th century, when during the course of a few decades steam was replaced by diesel as the primary fuel of the rail industry. The far-reaching operating advantages of the diesel locomotive over its steam-powered precursor helped drive a surge of post-war rail development in Europe and the rest of the world since the late 1940s.

"The main driver for change today is the need to reduce greenhouse gas emissions and fuel consumption."

Now the rail propulsion sector is in the midst of another technological turning point, one that could have as large an effect on the rail landscape as the steam-to-diesel transition of the 1940s and 50s. As before, this change has been taking place at a slow and steady pace over the course of many years of testing and development. And as before, the question being mulled by the industry is a simple one – what fuel will power the locomotives of the future?

Of course, unlike the rail fuel situation 60 years ago, there is now a range of possible technologies and fuel concepts that the industry could choose from. Indeed, it seems unlikely, with the variety of alternative fuel options on the market or in the pipeline, that any one fuel will come to dominate 21st century as diesel dominated the 20th. With the development of alternatives such as ultra-low-sulphur diesel, biofuels and hybrid technology, the market is becoming busier by the year.

Another key difference between the emergence of diesel trains in the 20th century and today’s alternative rail fuels are the priorities that new alternatives will have to meet to persuade operators and manufacturers to make the switch. Whereas the transition from steam to diesel predominantly focused on diesel’s operational benefits, the main driver for change today is the need to reduce greenhouse gas (GHG) emissions and fuel consumption.

Among the crowd of possible ways to shift the rail industry away from diesel operation, two options have been – with no pun intended – gaining particular traction. If we can separate alternative rail fuel technologies into short-term and long-term solutions, then the use of liquefied natural gas (LNG) is being championed as an eminently achievable short-term option. In the long-term, hydrogen power, or hydrail as it has become known in its rail application, brings with it the potential for the most sustainable and eco-friendly form of rail transport to date.

LNG has been making waves in many industries for the last few years, particularly since hydraulic fracturing and other technologies have helped unlock vast deposits of shale gas in the US. The resulting dip in gas prices has made natural gas a highly attractive option for power utilities, ship operators and other industries with significant energy costs.

And the influence of LNG is beginning to trickle into the transport sector. On the road, major conveyance companies are starting to convert, with UPS recently announcing that it would be expanding its LNG-powered truck fleet from 112 to 800. From a cost perspective, LNG offers a pretty compelling reason to stray from diesel fuel – compare average US diesel prices for 2012 ($3.97 per gallon) to the price of the equivalent amount of energy from natural gas ($0.48) and it’s easy to see why rail operators are getting excited about the cost-saving possibilities.

"From a cost perspective, LNG offers a pretty compelling reason to stray from diesel fuel."

"We are entering a new era where natural gas will be a major fuel," GE Transportation president and CEO Lorenzo Simonelli told Bloomberg in March. "If you believe the price advantage over diesel is going to stay here for the next ten to 15 years, then LNG is a revolutionary fuel."

The potential emissions reduction from the use of LNG is also significant, with initial estimates suggesting that the application of LNG for rail operations could reduce carbon emissions by 30%, while nitrogen oxide emissions could be slashed by up to 70%. With the rail sector facing increasingly stringent emissions regulations, such as the US Environmental Protection Agency’s rail air pollutions standards, which are due to come into force in 2015, LNG could be the key to avoiding fines or the need to install costly CO2-reducing add-on technologies.

These clear advantages have led to a new wave of LNG pilot projects in the rail industry, especially in North America. Hot on the heels of Canadian National’s LNG trial that started in September 2012, the US’s second-largest freight rail network BNSF Railway announced in March that it was working with GE Transportation and Caterpillar (through its subsidiary EMD) to develop modified LNG locomotives for testing later in 2013. The company plans to make a decision on whether to begin switching its 6,900-strong locomotive fleet to LNG in 2014. Given BNSF’s annual diesel usage of around 4.9bn litres, the potential savings are obvious.

LNG undoubtedly has its economic and environmental benefits as a locomotive fuel, but diesel has an advantage that comes from decades of constant use – an established infrastructure and regulatory structure. In these early days of LNG in the transport market, the cost and time required to set up a viable LNG supply chain for rail operators stands as the largest obstacle to its adoption, not to mention the regulatory hurdles that come with installing LNG tanks on rolling stock.

"The Class 1 rails will make the investment and put in the fuelling systems, but they still have to get the gas to those locations," CDM Smith economist Paul Bingham told Bloomberg. "Some other third party is going to have to play in that."

"Locomotives powered by hydrogen fuel cells emit nothing but water at the point of operation."

While LNG is making the rounds as a potentially beneficial short-term rail alternative to diesel, more radical options are being explored for use in decades to come. One of the most promising of these technologies is the use of hydrogen fuel cells, another system that has already gained some momentum in the automotive market.

Hydrail, as it has come to be known, is still in its infancy, with several small-scale demonstration projects around the world representing the limit of its development so far. Nevertheless, if we are to believe the US’s Hydrogen Economy Advancement Team chairman Stan Thompson, this sustainable fuel has a big future in the rail industry.

"By the middle of this century, hydrail is likely to be the world’s dominant railway propulsion technology," Thompson wrote in the Mooresville Tribune in April. "It harnesses sustainable and renewable – but intermittent – non-carbon energy sources to power railroads and transit lines electrically…but without the high cost and visual pollution of overhead wires."

So far, hydrogen fuel cells have primarily been used in static power generation applications and in the development of zero-emissions road vehicles. But the environmental advantages of hydrail speak for themselves. Locomotives powered by hydrogen fuel cells emit nothing but water at the point of operation, and the means of hydrogen production are independent of the oil-based economy – nuclear, wind and solar power are all feasible options. Small amounts of GHGs are emitted in the generation of hydrogen, but these emissions are negligible when compared to diesel-based operation.

Hydrail concepts also link up extremely well with the industry’s growing trend of hybrid rail vehicles. Hydrogen fuel cells can replace the diesel engines and generators used in modern diesel-electric trains, using energy generated by the fuel cells and electricity stored in batteries, which is produced by regenerative braking.

A small-scale demonstration of this hybrid hydrail technology was carried out in August 2012 by the University of Birmingham’s Centre for Railway Research and Education in the UK. The project team tested a hydrogen-powered locomotive over two days, hauling a load of more than 8,800lbs.

As the project’s leader Stephen Kent told Wired in 2012, the early usage of hydrail is currently most suited to low power and small-scale applications. Almost all current hydrail locomotives are in use in operations like closed-loop rail systems in mines and ports. Kent pointed out that it could prove especially useful for remote rural lines that are unlikely to be electrified. "It is highly unlikely they will ever be electrified, and at some point diesel is going to become too scarce and too expensive to carry on using," Kent said. "Hydrogen appears to be an ideal alternative."

However, hydrail technology is developing rapidly, with prototype projects taking place in the UK, US, Denmark, Japan, South Africa and others. Even the tiny island nation of Aruba is investing in hydrail, with the purchase of hybrid hydrogen fuel cell trams for its capital Oranjestad. As the technology becomes more sophisticated and cost-effective, doors are likely to open for hydrail to find a place in larger-scale heavy rail or high-speed operations.

Although, in some ways, LNG and hydrail seem to be in competition for the future of rail propulsion, in the long-run this race doesn’t need a winner. After all, no matter how cheap LNG is after the shale gas boom, this resource and its rock-bottom pricing won’t last forever. That being the case, the short-term solution of LNG could be an effective bridge towards the rail industry’s eco-friendly hydrail future in the long-term.

As Thompson, commenting on BNSF’s LNG pilot project with GE and Caterpillar, put it: "While [LNG’s] there, here’s hoping that the Caterpillar and General Electric locomotive developers…have the wisdom to anticipate and design for a post-carbon future – when the gas powering modified diesel locomotives is renewably-sourced hydrogen rather than exhaustible, climate-problematic, natural gas."

Russia is spending billions to make its rail infrastructure worthy of its growing economy.

Future of the German Defense Industry – Market Attractiveness, Competitive Landscape and Forecasts to 2019

Future of the Austrian Defense Industry – Market Attractiveness, Competitive Landscape and Forecasts to 2019

Future of the German Defense Industry – Market Attractiveness, Competitive Landscape and Forecasts to 2020