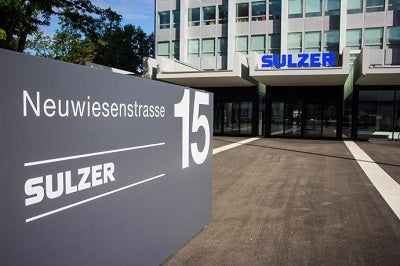 Orders from the water, power and general industry markets improved, whereas headwinds in the gas and oil market remained significant.

Sulzer confirms its guidance for the full year: currency-adjusted order intake and sales are expected to decrease by 5% to 10%. Operational EBITA margin is expected to be around 8%.

Regionally, across all markets, order intake declined in Europe, Middle East, and Africa, as well as in the Americas, but was slightly up in Asia-Pacific compared with Q1 2015. Growth in Asia-Pacific was positively affected by China, which improved substantially in all divisions from a low base compared with the prior year’s period and also sequentially.

The Sulzer Full Potential (SFP) programme is continuing to gain momentum. In response to an increasingly challenging market environment, the company is accelerating and deepening the program. It aims to achieve steady total annual savings of approximately Sfr200m a year from 2018 onwards. These savings will allow the company to mitigate the current market headwinds and to close the profitability gap to its top-tier competitors.

Based on these considerations and because of the impact of the strong Swiss franc, Sulzer announced its intention to close its manufacturing facility in Oberwinterthur, Switzerland. The company expects this restructuring to be completed in the first half of 2017. Sulzer aims to focus on fewer manufacturing sites globally to mitigate price pressure.

To further strengthen Sulzer’s position as a technology leader, the company acquired PC Cox Group. PC Cox is a leading manufacturer of handheld sealant and adhesive dispensers for industrial applications. This complementary acquisition allows Sulzer Mixpac a business unit of the Chemtech division, to compete globally as a comprehensive solution provider in the area of mixing, dosing, and application systems.

Sulzer confirms its guidance for the full year. Currency-adjusted order intake and sales are expected to decline by 5% to 10%. The company expects an operational EBITA margin, supported by the cost savings from the SFP programme, of approximately 8% (opEBITA in percent of sales).

Service Solutions for the Rail Industry

Renova has agreed to transfer ownership of five million Sulzer shares to the company as...

Start of Profitability Rebound and Return to Organic Order Growth