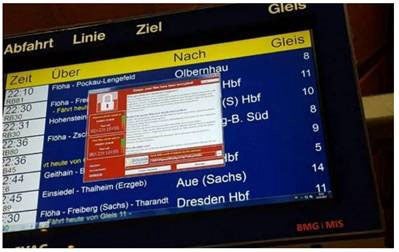 Rail passengers should see no disruption on station information screens manufactured by Ashby-based Infotec as a result of the cyber-attacks rampant at present.

The customer information display specialist does not use PC or Windows to drive its displays. It has invested heavily in its very latest Tetrus controller to drive a modernised display range. The dedicated controller has taken five years to develop and is at the heart of almost everything Infotec produces.

Infotec has always seen passenger information displays as an embedded device and as such the use of desktop technologies, PCs and the Windows operating system should be avoided. A clear example of this can be seen from this week’s cyber-attack which not only caused disruption to desktop PCs but also to devices utilising these PC and Windows technologies.

The implications of using a system that relies on PCs has been made obvious in Germany over the weekend, where the country’s DB (Deutsche Bahn) displays all with PCs have been seriously affected. The rail network is said to have been thrown into chaos with the ‘ransomware’ message demanding money appearing on screens at train stations.

Infotec’s Tetrus controller technology utilises bespoke embedded solutions making them more resilient and robust in harsh station environments. We can guarantee that no Infotec Tetrus controllers, or previous Olympus displays will be affected by this or future Windows cyber-attacks.

Unlike other approaches, Tetrus needs no keyboard, no mouse, no upgrades, no security packages, no additional graphics cards, no additional memory, no fans and no licences, it is built for the job. Most important, when cyber-attacks occur anywhere in the world, it does not use third-party software.

Displays and the information systems behind them have been designed and manufactured by Infotec for hundreds of UK rail stations including St Pancras, Euston, London Bridge, Birmingham New Street, Edinburgh and Cardiff as well as for overseas locations in countries such as Canada, Mexico, the US, Vietnam, and Venuzuela.