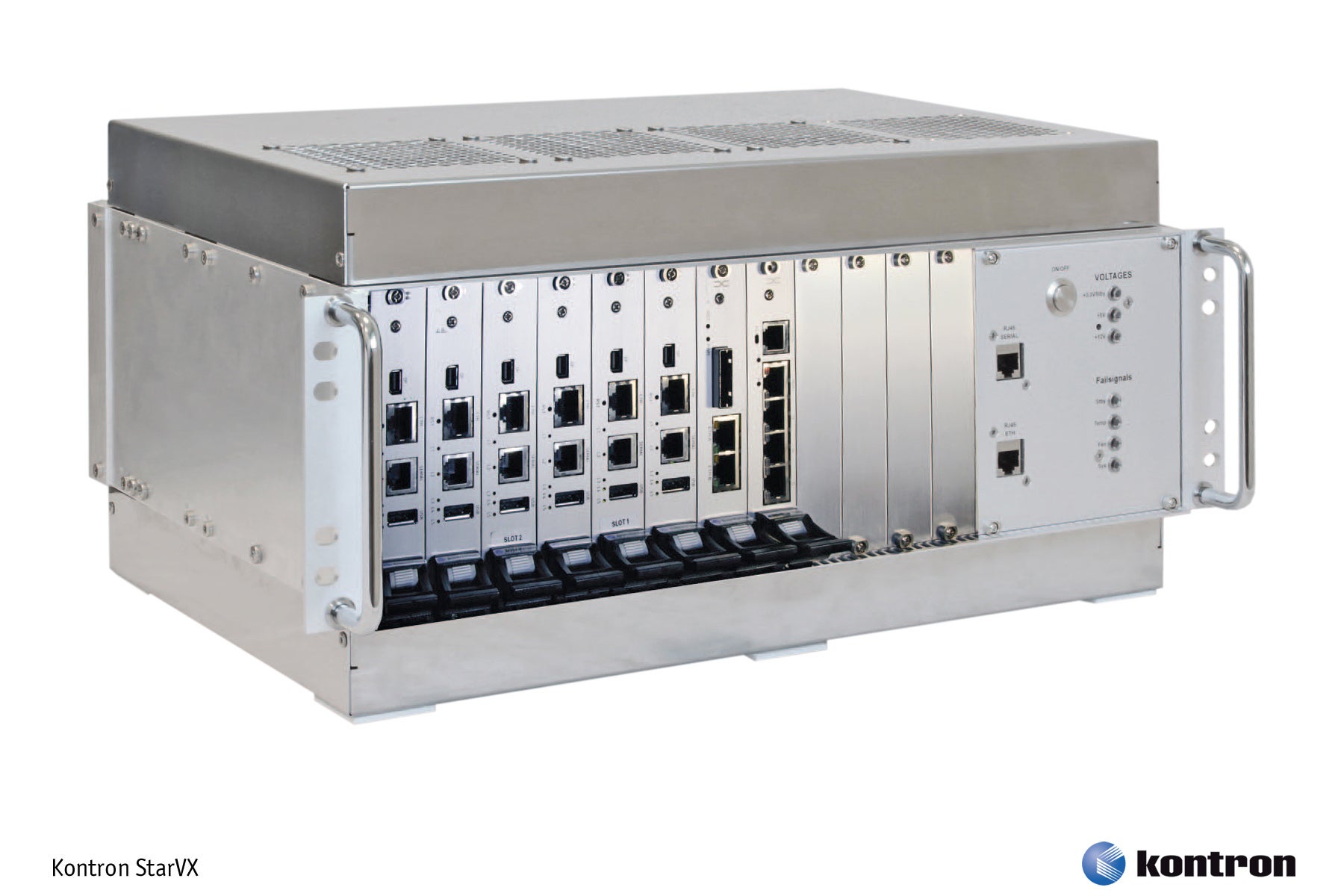 Kontron’s StarVX High Performance Embedded Computer (HPEC) system brings supercomputing I/O bandwidth and performance, previously only achieved in IT datacenters, to the battlefield. Based only on mainstream IT technology (TCP/IP, PCIe, Intel processors ) for greater platform support and assured longevity, the 3U VPX-based Kontron StarVX enables military systems developers to drastically reduce the process from design to field deployment of radar, sonar, autonomous vehicles and other 3D reconstruction-based systems.

Co-developed with PLX Technology, the Kontron StarVX integrates 3rd generation Intel Core processors that provide sustained 16 gigabytes per second (GB/s) speeds to/from the memory subsystem, while the Kontron 3U VPX platform architecture provides up to 6GB/s sustained bandwidth on the data plane through TCP/IP and 4GB/s on the PCIe backplane thanks to Kontron VXFabric. The result is an application-ready platform that delivers up to ten times more I/O data bandwidth that can even enhance existing TCP/IP-based unmodified applications. The Kontron StarVX system is being demonstrated in a real-world HPEC application during the Paris Air Show this week, June 17 – 23, in Kontron booth in Hall 4 B 76.

The Kontron StarVX is a rugged, air or conduction-cooled 3U VPX-based system that features PCI Express (PCIe) centralized backplane interconnect at up to gen3 speed. Kontron and PLX Technology collaborated to enhance Kontron’s innovative VXFabric software, which is designed to help engineers reduce development costs by simplifying and accelerating application development of inter-CPU communication in VPX system architectures. VXFabric provides the required software between a PLX Technology PCIe Gen 3 switch and the bottom of the standard TCP/IP stack to enable boards to run any existing TCP/IP-based application without having to be modified. This approach also simplifies the migration of deployments to emerging standards such as 10 and 40 gigabit Ethernet (GbE).

"Transforming the landscape of military supercomputing, the Kontron StarVX offers a simple and cost-effective platform that takes HPEC from the IT datacenter to the field by integrating a unique combination of mainstream technologies that offer outstanding bandwidth in a small footprint," said Joe Eicher, Military Business Line Manager, Kontron. "Kontron StarVX restores for the embedded domain the balance between I/O bandwidth and CPU number crunching performance by leveraging PCIe and 10GbE on the backplane to provide the necessary computing infrastructure for efficient implementation of the most demanding sensor processing applications."

Various configurations of the Kontron StarVX can be delivered, from an impressive list of building blocks. Its computing blades utilize Intel Core processor i7 single board computers that offer up to quad core performance with 16GB DDR3. Optional co-processing is proposed with Virtex 6 FPGA and GPGPU boards, while Virtex 6 FPGA boards with FMC slots, up to 6 channels sFPDP or 10 or 40 GbE input ports (on the 10 GbE switch Rear Transition Module)provide bulk data interface support for legacy and leading edge sensor designs. For software, Linux distribution, diskless node support and parallel workload management software are integrated into the Kontron StarVX.

Computer health management is enabled through Kontron VXControl that provides extensive status information, control and monitoring at the board and subtrack level via a flexible SNMP or HTTP interface. Airflow temperature is controlled on each slot, and payload boards can be held in standby mode to meet low-energy surveillance requirements.

"PLX and Kontron have collaborated to deliver a breakthrough in implementing PCIe and VXFabric technology as a powerful VPX backplane interconnect for TCP/IP communication," said Krishna Mallampati, Senior Director of Product Marketing at PLX Technology. "We believe the pervasiveness of PCIe and TCP/IP in all computer technologies positions VXFabric as an optimum resource that gives military designers the ability to innovate higher performance VPX systems and keeps their application software protected from obsolescence."