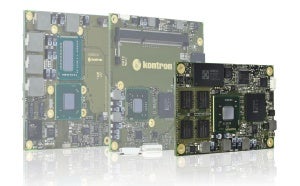 Bringing the well-known credit card-sized form factor (84 x 55 mm), initiated by Kontron, under the official umbrella of the COM Express, rounds off the standard’s portfolio, which can now better address the needs of SFF designs for ultra-mobile handheld devices.

By ratifying the COM Express mini form factor, PICMG has not only specified a new form factor, but has also extended COM Express by a complete. In anticipation of this formal adoption, Kontron underwent a renaming of their ETXexpress, microETXexpress and nanoETXexpress products to COMe "basic", "compact" and "mini" in February 2012.

As Kontron’s nanoETXexpress COMs have been on the market since 2008, a broad range of ready-to-use modules, evaluation boards and starter kits, as well as reliable design guidelines already exists. OEMs new to COM Express mini will also enjoy the benefits of broadly based support by VARs, system integrators and independent development service providers. This enables OEMs and developers to successfully enter the world of new ultra-small appliances based on credit card-sized COM Express modules.

"For us, the adoption of the mini form factor into the COM Express specification represents a major milestone that supports our consistent, standards-based product strategy", explains Dirk Finstel, CTO of Kontron.

"We initiated the nanoETXexpress product launches with the intention of building an official PICMG standard. This world’s first official standardisation process for a computer-on-module is now finalised and, as a result, customers now have access to the world’s one and only global x86 module standard that offers all relevant sizes from SFF up to the highest performance class.

"This is beneficial for customers because they can use the world’s largest computer-on-module ecosystem for their requirements based on x86 processors. Furthermore, thanks to Kontron’s groundwork on nanoETXexpress, they will also find a broad product portfolio with which they can instantly start developing COM Express mini applications."

The success story began with Kontron’s pioneering work in the field of small form factor modules. In 2004, Kontron was the first to launch a module that complied with today’s "basic" form factor. This was followed in 2006 by Kontron’s modules that meet today’s "compact" standard.

The latest in Kontron’s COM Express trio, nanoETXexpress, was launched in 2008. It is the module with the smallest form factor to date – the one that is now officially classified as COM Express "mini." Throughout the revision process by PICMG (COM Express basic and extended form factors in 2005, COM Express compact in 2010, COM Express mini in 2012), Kontron’s modules have served as the foundation of and the first examples for the official PICMG specifications.

COM Express mini at a glance

With a footprint of 84mm x 55mm COM Express mini modules feature the same physical dimensions and pin-out definition as credit card-sized modules previously called nanoETXexpress. In general, the installation height for mini modules is the same as for the other form factors. However, Kontron also offers a slim cooling solution that reduces the overall height to 8.5mm, enabling very slim designs that are convenient for hand held devices and panel PCs.

On the electrical side, COM Express mini uses the pin-out type 10 that uses a single connector with 220 pins to the carrierboard. Video signals can be transmitted via a digital display interface (DDI) configurable to DisplayPort, DVI/HDMS or SDVO and a single channel LVDS or optional embedded DisplayPort (eDP). This enables, for the first time, dual screen applications with independent content.

Further important features of the COM Express pin-out type 10 include four PCI Express lanes, of which usually one is reserved for 1x gigabit ethernet, 2x SATA, and up to 8x USB 2.0 with the optional support of 4x USB 3.0. By this, the pin-out type 10 provides ample possibilities to integrate a broad spectrum of peripherals and connectivity. Furthermore, AC97/HD audio in-/outputs enable the development of feature-rich multimedia solutions.

Up to two serial ports provide a common communication channel that is still in high demand for many embedded applications. As an option, the pins for one of the serial ports can be used for a controller area network (CAN) bus, a key feature important to many transportation and automation applications. Another feature that helps to simplify system designs is the newly-defined wide range power input for supply voltages, ranging from 4.75VDC up to 20VDC. This gives OEMs and developers higher flexibility to simply use what the integrated PSU or battery provides.

The latest addition of COM Express mini modules is the Kontron COMe-mCT10, the world’s first COM Express mini module with Dual-Core processing power. It is based on next-generation Intel Atom processors N2600, N2800 and D2550. Optimised for low-power small form factor designs, the PICMG COM Express Type 10 pin-out computer-on-module provides up to twice the graphics power, up to 28% higher processor performance and processor thermal design power (TDP) which is cut in half as compared to second generation Intel Atom processors.