Commercial shipping at Ukrainian ports has been put on hold by the country’s military following the invasion by Russian forces.

This suspension has raised concerns among grain and oilseeds exporters regarding supply disruption.

Meanwhile, Russia has halted the movement of commercial ships in the Azov Sea until further notice.

According to sources, the country has kept its ports in the Black Sea open for navigation. 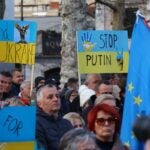 One European grain trader was quoted by Reuters as saying: “The market is still struggling to get a clear picture of the actual military situation on the ground. The ports in the Azov and Black Sea so far seem not to have been damaged according to the initial shipping agency reports.”

Due to the hostile situation, the market is waiting for force majeure declarations, denoting that suppliers will have to meet contractual obligations.

In a statement, shipping group Maersk said: “The current circumstances mean that Maersk has decided not to call any ports in Ukraine until further notice and will stop the acceptance of orders to and from Ukraine until further notice. Cargo currently en route to Ukraine is being planned for discharge in Port Said and Korfez; if this affects you then please expect a customer experience representative to get in touch shortly if they haven’t done so already.”

On the other hand, the firm’s services in Russia will continue but are potentially subject to change as developments continue.

Among the biggest Ukrainian ports in the Azov sea, Maripol primarily processes smaller vessels, which range between 3,000dwt and 10,000dwt.

The Azov Sea ports export wheat, barley and corn to Mediterranean importers, such as Cyprus, Egypt, Italy, Lebanon and Turkey.

In the case of vessels failing to depart in the near future, these countries would have to look for alternative supplies.

Ukraine has asked Turkey to shut the Bosphorus and Dardanelles straits to Russian vessels.

Russian forces invaded Ukraine in a combined attack by land, sea and air, making it the biggest attack by one nation against another in Europe since the Second World War.