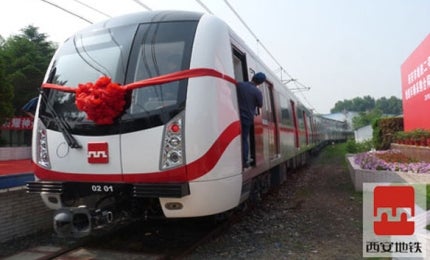 Xi’an Metro is a rapid transit system being developed in the city of Xi’an, Shaanxi Province, China. It currently features two lines connecting 36 stations and is expected to span over 251.8km in length upon completion. The estimated daily ridership is 500,000 passengers.

Plans for developing the Xi’an Metro were made in the mid-1980s, with a first draft comprising four lines submitted in 1994. The edited version of this, submitted in February 2004, had six lines and was approved in September 2006.

Xi’an Municipal People’s Government Subway Construction is the operator of the system, although financing is coming from the Bank of China. A consortium of five financial institutions provided a Yuan 13.1bn (approximately $2.1bn) loan facility, while China Development Bank’s Shaanxi Branch acted as the lead arranger and agent bank.

Of the planned six lines, two of the Xi’an metro system lines are currently operational, while the third is under construction. The remaining three are expected to be launched for construction after 2020.

Line 2, running 20.5km long and comprising 17 underground stations, was the first to be operational. It runs from the north railway station to Qujiang International Conference & Exhibition Centre. Construction began in September 2006 and it was opened to the public in September 2011. Earth pressure balance (EPB) shields were used to bore the tunnels.

Work on the 25.36km long second line, designated as Line 1, began in October 2008 and operations were commenced in September 2013. This covers 19 underground stations and runs from Houweizhai in the west to Fangzhicheng.

A further 7km extension, from Houweizhai to Xianyang City, is likely to open in 2016. Lines 1 and 2 intersect at Beidajie.

Groundbreaking for the third line, designated as Line 3, was held in May 2011, and operations are expected to begin in 2015.

Line 2 features 132 CNR Dalian Type B mass transit vehicles made up of stainless steel. The trains accommodate up to 1,880 people, with a maximum operating speed of 80kmph. Each section of the car is 118m long and 2.8m wide, and the cars contain advanced VVVF traction control, and digital and analogue-style electro-pneumatic brakes.

Based on a wideband solution with a frequency ranging from 600MHz to 2.4GHz, the wireless trunking component provides support for GSM, CDMA, WCDMA, TD-SCDMA and DCS systems.

Xi’an Metro’s power system is based on an AC switching power distribution cabinet that transfers power from the grid network to the uninterruptible power supply (UPS), which further supplies the output power to the equipment. An Optonix traction system also reduces travel time.

China Railway 11th Engineering Bureau Group was awarded the contract for Line 1 tunnelling works, while in June 2009 Robbins received the subcontract for supplying the TBMs.

The contract for providing the ventilation system for Line 1 and Line 2 was awarded to Shaangu.

In November 2013, for a contract worth €33m (approximately $23.9m), Alstom and Shanghai Alstom Transport Electrical Equipment (SATEE) signed on to supply Optonix traction equipment for 246 CNR Dalian cars for Line 3.

Meanwhile, Chengdu CSR Tunnel Equipment was tasked with providing earth pressure balance shields for the tunnelling, and Alcatel-Lucent installed the seamless communication network that enables mobile coverage in stations, tunnels and on the trains.