The first elevated metro rail in Wuhan started operating in September 2004.
The Wuhan Metro Line 2 is the first underground line comprising a 1.3km-long tunnel under the Yangtze River.
Construction work of the stations is undergoing.
The Lines 1, 2, 3 and 4 were operational by 2015, while the remaining lines will be operational by 2017. 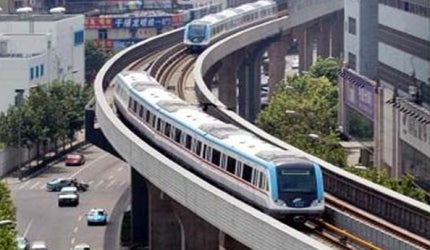 The first metro line in Wuhan, the capital of the Hubei province of China, became operational in September 2004. Wuhan is located at the meeting point of two rivers, Han and Yangtze, and the main purpose of constructing the metro is to ease traffic congestion on the bridges across the Yangtze River.

Operational since December 2012, line 2 of the metro is partly underground, whereas line 1 is completely elevated. The high-speed light rail project is managed by Wuhan Metro Group, and aims to provide a fast, safe, energy-saving and dependable mode of transport.

"Line 2 of the metro, which began operations in December 2012, is partly underground whereas line 1 is completely elevated."

The first phase of Wuhan Metro line 2 is 27.73km-long with 21 stations, linking the Hankou and Wuchang Districts. The dual-track, fully electrified line carries up to 800,000 passengers.

The first phase of Wuhan Metro line 3 is 30km-long with 24 stations, linking Zhuanyang and Hongtu Avenues. It was opened for traffic in December 2015 and is expected to carry 470,000 passengers.

The first phase of line 6 will be 35.95km-long, linking Sport Centre South in thr Zhuankou district with Huanhu West Road in the Dongxihu district. Construction on the line began in August 2013 and is expected to be completed by the end of 2016.

CREG was contracted to provide slurry tunnel boring machines (TBM) for Lot 10 of line 6. The metro system’s remaining lines, of which the master plans have been approved by the National Development and Reform Commission, are in planning stage, with service commencement scheduled by 2017.

Connecting Huangpulu with Zongguan station, the first phase of the line 1 was extended in 2010 to link Dijiao station to Huangpulu and Zongguen to Dongwudadao station. Line 2 connects Hankou and Wuchang provinces, while line 3 connects Tunyang Avenue with Hankou District.

Line 4 connects the Wuchang and Wuhan Districts and was constructed in two phases. The first of which connects Wuchang and Wuhan railway stations, with the second phase starting from Wuchang rail station and ending at Hanyang Gold Mouth, passing via Zhang Zhidong Lu and Hanyang Avenue.

Line 7 will run between Tianhe Airport and South Lake, while Line 8 will connect Panlong Town with Yezhi Lake.

Tunnel construction on line 2 of the Wuhan metro

Line 2 was built partly in a tunnel under the Yangtze River, at a depth of 48m, and is located between the Fanhu and Hankou stations. The two ends of the tunnel have a gradient of 30%.

Construction of the tunnel was completed by February 2012, with excavation work done using a boring machine provided by NFM Technologies. It took three months to dig through the water-clogged clay.

The first phase of Line 2, which can be extended in the future to include eight car trains, consists of 30 trains, with a 100km/h maximum speed, 80km/h operation speed and average speed of 36.6km/h. Coaches have an anti-corrosive aluminium and steel body.

Mute Metro cars manufactured by CSR Zhouzhou Electric Locomotive are used as the rolling stock on Line 4. The traction motor and convertor system of the cars harness 20% of the noise, while the aluminium alloy honeycomb structure of the locomotives and double aluminium-alloy honeycomb floor reduce noise and make the coaches light and resilient.