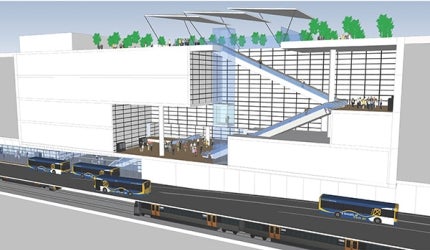 The Underground Bus and Train (UBAT) project is a proposed rapid transit system for the city of Brisbane in Queensland, Australia. It will be the world’s first project to combine a railway and a busway in a single, double-decked tunnel.

The tunnel will run beneath the Brisbane River and Brisbane’s Central Business District (CBD) and will serve as a critical link to the south-east Queensland public transport network. It will also be connected to Legacy Way tunnel, upon completion.

UBAT is currently in its planning stage and is estimated to cost $5bn. Its reference design and Environmental Impact Statement (EIS) review is expected to be completed by mid-2014. The EIS review is being conducted by the Department of State Development, Infrastructure and Planning.

The reference project design is based on an international standard of turn-up-and-go transit systems. Initial drilling activities for the project were started in January 2014. Construction work will begin in 2015 and is expected to be completed by 2020.

UBAT is owned by the Department of Transport and Main Roads. The Queensland Government is working in collaboration with the Newman government and the Brisbane City Council to deliver the project.

Traffic in south-east Queensland, near the Brisbane River, has been increasing at a rapid pace. The Merivale Bridge, the only rail bridge across the Brisbane River, is expected to reach its full capacity by 2020 given the current traffic growth rate.

UBAT will provide an alternative route for the traffic, reducing the congestion. It will provide faster, frequent, direct and reliable transport for people in the region. It will also provide better train services at the south of the river, including extra Gold Coast express services, new Beenleigh express services and new peak-hour Cleveland services. The travel time between Beenleigh and the CBD will be reduced to 14 minutes by train.

The tunnel will provide access to key local destinations such as universities, hospitals, sports stadiums, event areas, parklands and workplaces.

UBAT will entail the construction of a new 5.4km-long and 15m-wide double-decked railway and bus tunnel. The tunnel will feature two bus lanes, two train lines and three underground combined bus-and-rail stations. The two train lines will run in the lower section and the two bus lanes in the upper.

The tunnel will be dug at a depth of 35m-45m with the help of the some of the biggest TBM machines ever used in Australia. It will be built on the Queensland government-owned Dutton Park railway station land, because purchasing private property will increase the project cost.

The George Street Station will be located near the Queensland University of Technology (QUT) Gardens Point campus.

A direct pedestrian link will be constructed from the Princess Alexandra Hospital to the Park Road railway station to facilitate the passengers of the Dutton Park railway station.

The tunnel will start from the Boggo Road urban village near Dutton Park in the south and will run towards Victoria Park in the north. It will pass beneath Woolloongabba, the Brisbane River and the CBD.

"It will pass beneath Woolloongabba, the Brisbane River and the CBD."

Similarly, at the southern end, the bus links will be connected to the Princess Alexandra Hospital bus station and will further join the eastern busway. The railway links will fasten with the Gold Coast line at the south of Park Road railway station.

New generation rolling stock is planned to be used on the route. Each train will feature seven cars.

The railway stations will be equipped with real-time passenger information and off-board ticketing systems. Each station will feature two rail platforms, which will be increased to six in the future.