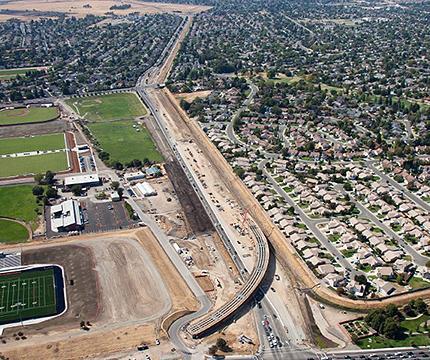 The Blue Line to Cosumnes River College (CRC) Light Rail Extension, also known as the South Line Phase 2 project, was built by the Sacramento Regional Transit District (RT) in the US.

It is a 4.3 miles (6.92km) extension from the existing terminus at Meadowview Road to Cosumnes River College.

The new light rail line extension project with a new transit centre at CRC station provides commuters with an alternative to Highway 99 and minimises congestion on Interstate 5. The extended line is expected to provide about 11,270 average weekday trips by 2030. The project created 1,700 new jobs and improves air quality in the region.

RT circulated the final draft environment document for the project in October 2008 and a record of decision (ROD) was obtained in December 2008. Preliminary engineering was completed in 2009.

The LONP for the construction of the two light rail bridges was granted in April 2012, and construction began a month later.

The light rail extension project entered the final design phase in May 2012 and received the full funding grant agreement (FFGA) from the federal government in January 2012, leading to the starting of construction activity for the civil, track section and stations in August 2013.

The CRC Station parking structure was opened in June 2013. The five-level, four-storey parking structure includes a garage with more than 2,700 parking spaces for CRC students and RT light rail passengers. It features solar photovoltaic panels on the roof and electric vehicle charging stations.

Each of the four stations features side platforms, one for boarding inbound trains and the other for boarding outbound trains. Passenger shelters with a minimum width of 14ft are located in each station.

Each of the four stations also features a mini-high platform at the front-end for providing easy access to mobility-impaired passengers, fare vending equipment, drought-resistant landscaping, facilities, including RT standard benches, trash containers, bicycle racks and lockers, and drinking fountains. Two electronic message display signs were placed on each platform. LED lighting and parking areas are also common to all stations.

Siemens was awarded a contract in August 2012 to refurbish 21 high-floor light rail vehicles (LRVs), which RT acquired from Santa Clara Valley Transportation Authority in 2003. The LRVs, built by Urban Transportation Development (UTDC) in 1987, were upgraded to meet the current operating requirements and extend their service life by 15 years.

The total estimated investment for the construction of the extension line is $270m. The US Federal Transit Administration (FTA) contributed about 50% of the project cost by offering funding under its New Starts programme. The FTA announced the $135m funding agreement in January 2013. The rest of the funding was secured through state and local sources.