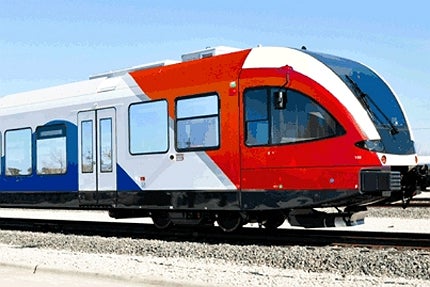 TEX Rail (Tarrant Express Rail), formerly known as the Southwest-to-Northeast Rail Corridor, is a 37-mile long proposed commuter rail line in the Tarrant County of Texas, US. The rail project, introduced in 2006, is being developed by Fort Worth Transportation Authority (The T).

TEX Rail will offer a passenger service from south-west Fort Worth to Dallas-Fort Worth International Airport (DFWIA) via Downtown Fort Worth and cities in north-east Tarrant County, including Haltom, North Richland Hills, Colleyville and Grapevine.

Construction of the commuter rail project began in August 2016 and the start of revenue service is expected in late 2018.
The travel time between south-west Fort Worth to DFWIA will be about 77 minutes when the line is complete.

The new passenger line is projected to have ridership of approximately 18,000 trips a day by 2035.

“The travel time between south-west Fort Worth to DFWIA will be approximately 77 minutes, when the line is complete.”

A commuter rail line along the corridor was selected as the locally preferred alternative (LPA) in November 2006. The name of the project was changed from the Southwest-to-Northeast Rail Corridor to TEX Rail in October 2008. A draft environmental impact statement (EIS) for the proposed project was also released in the same month.

Documents required for the request of federal funding were submitted in September 2011. The US Federal Transit Administration (FTA) approved the preliminary design of the project in March 2012.

Final environmental clearance for TEX Rail project was given in the first half of 2014, while the Record of Decision for the project was issued in September 2014.

The project is due to be developed in phases. Construction of the first phase began in 2016. The first phase has been designated as the line between T&P Station in Downtown Fort Worth and the DFW Airport. The commuter line will be extended to south-west Fort Worth in the next phase of the project.

The project also includes construction of new stations, expansion of existing infrastructure and the purchase of locomotives, cab control cars and bi-level coaches.

The double-track commuter rail will follow the route of the existing rail lines from Sycamore School Road in south-west Fort Worth to the north entrance of DFW Airport through north-east Tarrant.

“Tex Rail will be operated with diesel multiple units (DMUs) with a maximum speed of 59mph.”

A total of 14 stations have been planned for the new passenger line, with Summer Creek/Sycamore School Road Station and DFW Terminal A/B Station being the two terminal stations.

TEX Rail will use TRE’s two operating stations in Downtown Fort Worth, namely the Intermodal Transportation Centre (ITC) and the T&P terminal. Each new station, with a footprint of six to 12 acres, will have train platforms and park-and-ride spaces.

The commuter line also provides connection to TRE from ITC and T&P stations. TRE links Downtown Fort Worth with Downtown Dallas through an east-to-west route.

TEX Rail will be operated with diesel multiple units (DMUs) with a maximum speed of 59mph. Use of DMU vehicles for TEX Rail was approved by The T in December 2012.

Diesel rail cars as opposed to electric cars were chosen for the passenger line, mainly for two reasons. Firstly, DMUs are less costly compared to electric vehicles and, secondly, the tracks of existing freight lines to be shared by TEX Rail do not use electrification.

CH2M HILL was selected as the program management consultant for the commuter rail project by The T in March 2011.

The preliminary engineering for the TEX Rail project is provided by a team led by URS Corporation.

AWH was contracted by FWTA to deliver pre-construction services for the TEX Rail project in June 2015.

Cotton Belt Regional Rail Corridor is an ambitious project included in the Dallas Area Rapid Transit (DART) Transit System Plan 2030, which is scheduled to be implemented during a 2025-2030 timeframe.