DART, NCTCOG and The T 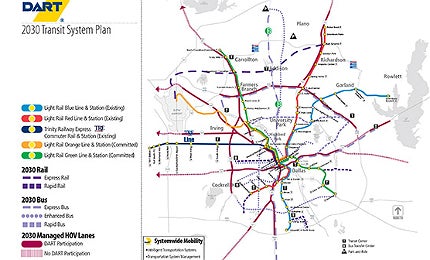 Cotton Belt Regional Rail Corridor is an ambitious project included in the Dallas Area Rapid Transit (DART) Transit System Plan 2030, which is scheduled to be implemented during a 2025-2030 timeframe. The project mainly consists of a 41.84km (26 mile) proposed railway line, stretching between DFW International Airport and Richardson-Plano stations on the DART Red Line.

"Cotton Belt Rail Line aims to provide mobility and connectivity for passengers along the corridor."

In 1990, DART acquired 86.9km (54 miles) of Cotton Belt Rail Corridor between north Fort Worth and downtown Wylie in Texas for future transport uses. An initiative to identify interested companies for designing, building, financing and operating the proposed passenger rail service in the corridor was taken in May 2009. The proposal will be a public private partnership (PPP) between the selected firm, Dallas Area Rapid Transit (DART) and Fort Worth Transportation Authority (The T).

A resolution was approved in March 2010 by the Board of Directors of DART requesting North Central Texas Council of Governments (NCTCOG) and Regional Transportation Council (RTC). This proposal asks NCTCOG and RTC to identify the source of funding for the project. A Memorandum of Understanding between DART and RTC was signed in May 2010. A conceptual engineering and funding study was completed by NCTCOG.

The Cotton Belt Rail Corridor falls in the vicinity of DART and the T. DART owns approximately 54 miles between north Fort Worth and downtown Wylie. The final service plan drafted by DART in 1983 proposed a passenger service between the Red Line and Green Line in downtown Carrollton. The Transit System Plan (TSP) 2030, approved by the DART board of directors in October 2006, renewed the proposals of a passenger service line through the Cotton Belt Rail Corridor.

Cotton Belt Rail Line aims to provide mobility and connectivity for passengers along the corridor. The project provides links to the TRE service in downtown Fort Worth, the DART light rail system at DFW Airport by means of Orange Line, Green Line in Carrollton and Red Line in Richardson / Plano area. The project also connects Addison Transit Centre, which provides good bus connectivity. Proposals for a future link between downtown of Carrollton and the planned Denton and Carrollton DCTA passenger rail service are also being discussed.

The PPP mode for the project was initiated in May 2009. A Memorandum of Understanding was signed between Dallas Area Rapid Transit and the Regional Transportation Council (RTC) in May 2010. The Cotton Belt Passenger Rail Corridor Innovative Finance Initiative, a Request for Proposal (RFP) document was thereby issued. It is divided into two phases. A funding strategy will be identified in the first phase and project financial plan will be formulated in the second phase.

DART is planning to award the contracts through an open competition as dictated by the law. Partnership of Livable Communities was selected as the lead for financing.

The corridor currently is divided into three segments, with an additional segment to be added in future.

"Expected daily ridership is around 15,500 passengers, which is estimated to increase depending on the development of the corridor."

Segment 1 is 35.88km (22.3 miles) long extending from DFW Airport to downtown Carrollton. It is linked with DART Green Line, BNSF railroad and the DCTA project. The segment will operate on a single track alignment and all the stations will be double tracked.

Segment 2 stretches 16.73km (10.4 miles) between Sycamore Road and ITC Station. It will begin south-west of Fort Worth and run to downtown Fort Worth, following the Fort Worth & Western Railroad corridor. The line continues through Union Pacific (UP) railroad over a short section and finally connects to the TRE Corridor.

The Southwest to Northeast Commuter Rail Project (SW2NE), between Segment 2 and Segment 3, is currently under construction under The T and is expected to start operation in 2013.

Segment 3 stretches 40.55km (25.2 miles) between ITC Station and DFW airport. The station extends along TRE network to UPRR Corridor and Cotton Belt and passes through Haltom City, North Richland Hills, Colleyville and Grapevine, ending at DFW airport. Segment 4 is planned between DART Red line and Downtown Wylie. It passes through the communities of Murphy and Wylie.

In December 2012, the Regional Transportation Council approved funding to Fort Worth Transportation Authority to buy rolling stock for the Cotton Belt line. The funding comes as a commitment from RTC, the T and the Texas Department of Transportation to contribute $100m for the purchase of 20 rail vehicles.

DART shortlisted a new rolling stock model for operation on the Cotton Belt Corridor lines. The vehicle is designed to be lightweight and more environmentally and community friendly than the previous generation’s commuter rail vehicles. DART is coordinating with the rail industry to develop the new vehicle with a few important specifications.

The engine in particular is designed based on the emission air quality standards designated by Environmental Protection Agency (EPA). Each vehicle will have a self contained engine with no additional locomotives. The trains will be sized depending on the demand.

The electric engine of the train will be powered by a diesel generator insulated in an internal compartment to minimise noise. The rolling stock will avoid overhead wires and will have aerodynamic appearance with wide entrance doors.

The light rail system, Dallas Area Rapid Transit (DART), is to be doubled in size during the next decade following agreement on a $2.4bn investment programme.