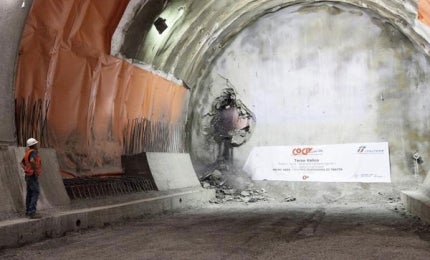 The Genoa-Milan High-Speed, High-Capacity Railway Line, also known as Terzo Valico dei Giovi (Terzo Valico), is being constructed to improve the railway connections between the Ligurian bay ports and the northern Tyrrhenian Sea ports with railway lines in northern Italy and the rest of Europe.

The project forms part of the Rhine-Alpine Corridor, one of the corridors of the larger trans-European transport network (TEN-T core network), which connects Europe’s most populated and influential industrial regions.

Italian railway company Rete Ferroviaria Italiana (RFI) is the project client, whereas Italferr is supervising the project, and the COCIV Consortium comprising Salini-Impregilo (64%), Condotte (31%) and CIV (5%) has been appointed as the general contractor.

"The final design works for the project started in September 2003, construction works started in April 2012, and commissioning is scheduled for 2020.."

The final design works for the project started in September 2003, construction works started in April 2012, and commissioning is scheduled for 2020.

The project will redirect the freight traffic from road to rail, bringing about environmental, safety and economic benefits, and is expected to generate approximately 4,000 jobs during the peak construction phase.

In addition, the project will also shorten the journey time for cargo traffic that comes from the Far East in the Mediterranean by choosing the Ligurian bay ports and the northern Tyrrhenian Sea ports, to the North Sea ports.

The new Italian high-speed / high-capacity railway line will be 53km-long, of which 37km will comprise tunnels. It will traverse 12 municipalities in the provinces of Genoa and Alessandria, and the regions of Liguria and Piemont.

The line’s interconnections will be approximately 23km-long. The section of the line stretching between Genoa (Bivio Fegino) and the Plain of Novi will primarily comprise tunnels, except for a short stretch in the open at Libarna.

Naples-Afragola (Napoli-Afragola) is a proposed high-speed railway station in the metropolitan city of Naples, Italy.

The excavation works for the Campasso Tunnel, performed as part of Lot 1, was completed in July 2015. The 600m-long tunnel, located within the City of Genoa, will connect the new Terzo Valico with the existing Succursale dei Giovi (Genoa-Milan-Turin route) line.

The main Valico tunnel, which will be approximately 27km-long, is being constructed under Lot 2, while Lot 3 entails the construction of the Serravalle tunnel. The tunnels are designed to be adjacent, single-track tunnels adjoined by cross-connections.