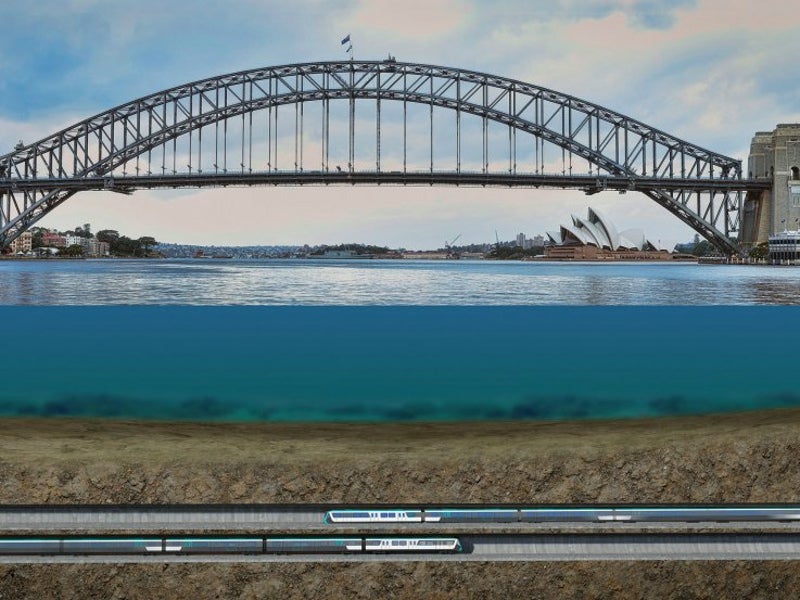 Upon completion in 2024, the 66km-long Sydney Metro will be the first dedicated rapid transit line in Sydney. It is expected to increase the network capacity by 60%, creating space for 100,000 additional passengers an hour during peak times.

Stage one of the Metro project, known as Sydney Metro Northwest, will connect Sydney’s north-western suburbs to Chatswood. The line is still under construction and scheduled for opening in the first half of 2019.

Stage two will extend the metro from Chatswood on the north via Sydney’s central business district (CBD) to Bankstown in the south. The line will cross Sydney Harbour through a 15.5km-long twin rail tunnel to be constructed as part of the same project.

The second stage is divided between the Chatswood to Sydenham section and the Sydenham to Bankstown section. The first section, which will be predominately an underground line, received approval in January 2017, following which construction works have begun. The line is expected to become operational in the second half of 2020.

Tunnelling on the Chatswood to Sydenham section

The Chatswood to Sydenham section will be a 16.5km-long line, 15.5km of which will be an underground segment crossing the Sydney Harbour and CBD.

Five tunnel boring machines (TBMs) will be used to drill the twin tunnels between Chatswood and Sydenham.

Of the five, four will be double-shield, hard rock, gripper-type TBMs used for the underground section between Mowbray Road, Chatswood and Bedwin Road, Marrickville.

One specialised TBM will be deployed for the Sydney Harbour section, which is composed of sandstone, clay and sediments. The TBM will excavate the ground between North Sydney and the new Barangaroo station.

The specialised TBM will integrate two technologies, earth pressure balance mode and slurry mode, that will allow operators to adapt to different ground conditions as the excavation work progresses.

The first TBM will commence drilling by the end of 2018, followed by the remaining four to complete the entire tunnelling work by 2021.

Details of the new metro stations on the Southwest metro line

Details of the Sydenham to Bankstown section

Unlike the Chatswood to Sydenham section, the Sydenham to Bankstown section will include an upgrade to the existing T3 line and the corresponding stations.

“Following the upgrade, the T3 line will operate as a standalone line for the Southwest metro between Sydenham to Bankstown.”

The 13.5km line between Sydenham and Bankstown, along with 11 rail stations at Sydenham, Marrickville, Dulwich Hill, Hurlstone Park, Canterbury, Campsie, Belmore, Lakemba, Wiley Park, Punchbowl and Bankstown, will be upgraded to metro standards.

Following the upgrade, the T3 line will operate as a standalone line for the Southwest metro between Sydenham to Bankstown, while continuing to be operated by other Sydney Trains beyond Bankstown.

The stations along the T3 line will be converted into user-friendly spaces for pedestrians, cyclists and passengers. Modifications will be made to station platforms, layouts and certain concourse locations to ensure efficient functioning. Lifts, level access and platform screen doors will be installed to provide easy accessibility.

The planning approval process for the Sydenham to Bankstown section has started, with the technical and environmental studies currently underway. Once approved, works on the upgrade will begin in early 2018.

“Five tunnel boring machines (TBMs) will be used to drill the twin tunnels between Chatswood and Sydenham.”

The scope of the contract includes the construction of a twin-tunnel between Chatswood and Sydenham, 57 cross passages between the tunnels, and a temporary access shaft at Blues Point and tunnel dive structures.

It also includes the excavation of six new underground metro stations and a crossover cavern at Barangaroo station, as well as the design and manufacture of approximately 99,000 precast concrete segments for tunnel construction.

In addition, the contract will cover the demolition and removal of existing buildings on the construction sites.

Financing for stage-2 of Sydney Metro

The Sydney Metro City & Southwest project is estimated to cost between $11.5bn and $12.5bn. The New South Wales government will fund $6.2bn for the project.