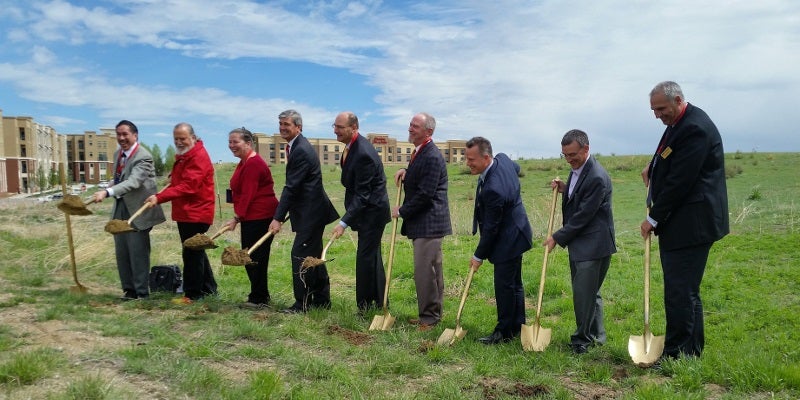 Construction on the extension of Southeast light rail system from Lincoln Avenue to RidgeGate Parkway in Douglas County, US, started in May 2016. The expansion is expected to be completed by early-2019. The project is being managed by Regional Transportation District of Denver (RTD) and part of the RTD’s FasTracks programme, which is the biggest transit expansion project in the US.

"The extension line will connect people in the rapidly growing part of the metro area to the rest of the region, including Denver International Airport."

The Southeast extension will run along the west side of I-25 from the Lincoln Station and cross over the highway and go down to the east side of the highway to reach RidgeGate Parkway in Lone Tree. The new extension line will have a train service frequency of five minutes during peak times and six minutes during off-peak times.

Southeast Rail Line currently has length of 19 miles (30.5km) and connects passengers at I-25/Broadway to Lincoln Avenue in Douglas County, as well as runs along I-225 from I-25 to Parker Road in Aurora. The extension line will connect people in the rapidly growing part of the metro area to the rest of the region, including Denver International Airport.

Details of the rail extension project

The extension will include addition of 2.3 miles (3.7km) of light rail on the existing Southeast rail line, 1,300 more parking spaces, as well as bus transfer and three Kiss-n-Ride stations. It also includes construction of a five-span, 620ft-long bridge over Lincoln Avenue, an 11-span, 1,397ft-long bridge over the I-25, and a four-span, 506ft-long bridge over RidgeGate Parkway.

The new stations along the extension line will include an end-of-the line station at RidgeGate, and Kiss-n-Ride stations at Sky Ridge Medical Center near Sky Ridge Avenue, and Lone Tree City Center near Lincoln Avenue.

The final EE along with 30% of basic engineering was completed in 2010. The environmental analysis (EA) began in 2011 to pursue federal funding for the project. The US Federal Transit Administration’s (FTA) New Starts application process began in 2012 and the same was granted development nod in 2013.

The RTD board of directors gave final approval to go ahead with the Southeast Rail Extension in July 2014.

Balfour Beatty Infrastructure was awarded a $140m contract to design and build the Southeast Rail Extension in July 2015. Other contractors involved in the development of the project include Parsons Brinckerhoff for the design, Transit Safety & Security Solutions for providing system safety, Systems Consulting for quality assurance, and Communication Infrastructure Group for public information.

Financing for the southeast extension project

The southeast extension project is estimated to be completed with a $233.1m investment, $34m of which approximately was spent on the preliminary engineering and design and to acquire eight light rail cars in 2014. The remaining $198.7m will be financed through federal, private and local funds.

The FTA will provide $92m funding for the project under the New Starts programme grants. Local governments and private businesses will contribute $25m in cash and $15m in right-of-way and permits, and RTD will contribute approximately $66m through local funding sources.