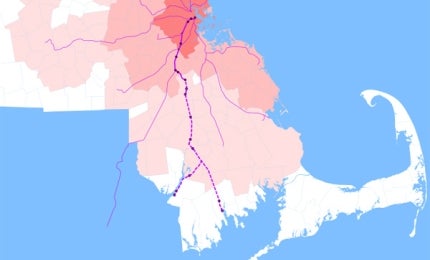 Being developed by the Massachusetts Bay Transportation Authority (MBTA), the South Coast Rail Project will provide passenger rail transportation service from the south station in Boston to the south coast of Massachusetts, US. The project will involve the construction of ten new stations connecting the towns of Taunton, New Bedford and Fall River to Boston.

The $2.3bn project is scheduled for completion in 2021. It will create approximately 3,800 jobs and will return $500m to the economy each year.

The project is currently in the design and approval stage. The final environmental impact statement was issued in September 2013. Construction works to rehabilitate certain sections of existing rail lines along the route, including the replacement of ties and bridges, started in November 2013 to support the planned commuter line.

"The commuter rail project is being undertaken to restore passenger services from New Bedford and Fall River to Boston."

The project also involves the reconstruction of 44 at-grade crossings and 34 bridges along the route. Two new layover facilities have been proposed in the New Bedford and Fall River branches of the line for the overnight halt of trains.

A traction power system comprised of a main substation at Easton and New Bedford, a switching station at Canton and Berkley and six new paralleling stations at Freetown, Easton, Taunton, New Bedford and Fall River will be developed to support the electric trains on the line.

A new positive train control (PTC) signal system will be deployed for the section of line stretching from Canton Junction to New Bedford and River Falls, and the Boston-Canton Junction segment will use the existing signaling system on the Northeast Corridor (NEC) rail line connecting New York and Boston.

The South Coast commuter line will run on 15.5 miles (25km) of existing NEC track infrastructure from Boston to Canton Junction. The line will then continue 3.8 miles (6.1km) on the active Stoughton line from Canton Junction to Stoughton, which will be reconstructed as a double-track line.

New tracks with a route length of 16.4 miles (26.4km) will be laid from Stoughton Station to Weir Junction in Taunton, where the South Coast rail will use the routes of the New Bedford main line and Fall River secondary line, both operated by CSX Transportation, to connect New Bedford and Fall River.

The 55-mile route between New Bedford and Boston can be travelled in 77min, while the travel time for the 52.7-mile Fall River-Boston route will be 75min.