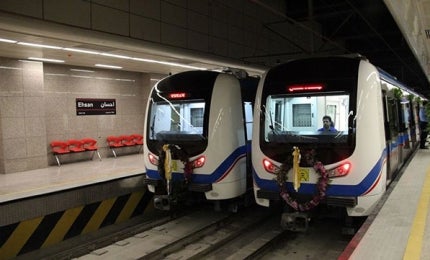 Shiraz Metro is an urban rapid transit project being built in Shiraz, the capital city of Fars Province of Iran. Currently being developed and operated by Shiraz Urban Railway Organization, construction of the metro rail project started in 2001.

The first section of Line 1 of the metro system, running 10.5km from Ehsan in northern Shiraz to Namazi in central part of the city, was opened to public in October 2014. Construction is underway to further extend the line from Namazi to Gol-e-Sorkh Square near the airport, to increase the total length of the line to 24.5km.

A 10km Line 2 interchanging with Line 1 at Imam Hosein Square is also in early stage of construction, while four more lines, including the 10km Line 3 monorail, are planned to be built in future. The total length of the system is planned to be 88km.

Line 1 of the Iranian Metro runs 22km underground with much of the line passing through cut-and-cover sections and two side-by-side tunnels of 6.6m diameter. The line includes 20 underground stations and one surface station at Chamran Bridge. Each station is 100m long and 20m wide and features passenger information displays both in English and Farsi.

"The first section of Line 1 of the metro system, running 10.5km from Ehsan in northern Shiraz to Namazi in central part of the city, was opened to public in October 2014."

The second line, starting from Kolbeh Sadi square in the north-east and ending at Mianrood in the south-east Iran, will include eight underground and two at-grade stations. The Line 2 is expected to be used by approximately 16,000 passengers an hour and will cross Line 1 at Imam Hosseini square, Line 4 at Esteghlal station, Line 5 at Sadi station and Line 6 at Rahmat station.

The 10km-long Line 3 will have five stations.

Each TBM weighing 600t has an installed power of 1,600kVA and a cutterhead power of 900kW. The machine has a maximum rotating speed of 3rpm and the front shield was filled with debris extracted by a screw conveyor. The tunnel foundations are supported by 40 24m-long friction piles with a 1.2m diameter.

Two TBMs are expected to be used for the excavation of tunnels in the Line 2.

Trains on Line 1 of the Shiraz Metro run at a maximum speed of 80km/h and are powered by a 1,500VDC supply. Each train-set consists of five cars measuring 2.65m wide and 3.8m high each.

SYSTRA was engaged in 2005 to conduct an independent review and approve the operational studies, detailed design for civil engineering, stations and workshops, and technical specifications for railway equipment and rolling stock for the metro.

Penta Engineering was awarded the contract for conducting preliminary/definitive design of signalling, telecommunications and traffic management for Shiraz Metro Line 2.

The contract for the design, engineering, installation and operation of air ventilation and smoke exhaust system of the stations and tunnels was awarded to Tabiran.

Alcatel-Lucent is the supplier of telecommunications network equipment and services for the metro. Bamrah was contracted for the construction of cut-off walls and supporting buildings, and excavation of ten stations for the Line 1.

NFM technologies supplied the TBMs, while Anuua was engaged to conduct civil works for the tunnel construction.