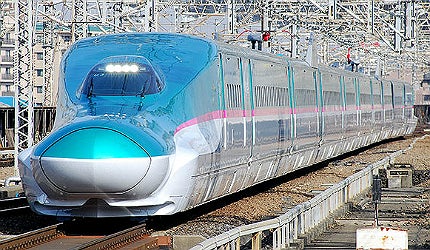 The high speed train runs on Tohoku Shinkansen, a Japanese high speed line connecting Tokyo with Aomori, in Aomori Prefecture. JR East placed an order for a fleet of 59 ten-car sets of the E5 series for delivery from March 2011.

Though the train could run up to speeds of 400kmph during test runs, its top speed was fixed to 320kmph for passenger and environmental comfort, from 2012.

Japan’s famous bullet train Shinkansen has been impressive since its debut in 1964. Throughout its operational life, it has not recorded any major accidents and stands as a symbol of safety.

JR East’s research programme on the E5 series was initiated in 2002 to design a high speed train which could travel with a speed of 360kmph. These train sets were developed based on the former experimental high speed trains, Fastech 360.

East Japan Railway released the exterior and interior design of the train in February 2009.

The new generation E5 series trains are designed to be more comfortable and faster than ever before. It is designed to be a business and luxury car service. It comes with a premium first class seating area, called GranClass.

"JR East’s research programme on the E5 series was initiated in 2002 to design a high speed train which could travel with a speed of 360kmph."

The train features a long nose which extends 15m to the front. It prevents ‘tunnel boom’, the noises produced due to uneven air pressures when the train enters a tunnel at a high speed. It has a full bogie cover which is soft enough to reduce the aerodynamic sound. The mechanical noise produced during the running is absorbed to a large extent by the equipment and sound absorbing materials mounted underneath.

The train sets are preinstalled with low noise pantographs fitted with sound insulators on both sides. These new train sets use only one pantograph device, unlike the previous models which use two, therefore helping to reduce the noise levels further.

The two very important features in the design of the vehicle are the full active suspension (FSA) and Body Tilting System. Full active suspension reduces the vibration of the moving bogie. The centrifugal force is nullified using the tilting system installed to the bogies.

The integration of these two systems detects and regulates tilt and lateral movements, thereby balancing the sense of shaking on account of the high speed at curves. These successively enhance the ride quality and comfort even at a speed of 320kmph and curve radius of 4,000m.

The state of art braking system installed in the rolling stock intensifies the attachment between the rails and wheels, even at high speeds, and reduces the stop distance marginally.

The interiors feature genuine leather seats and wool carpeting. Dark wood and metallic elements were used create a comfortable atmosphere for the passengers.

The seats come with an electric power recline system with seat back, seat pad foot rests, angularly adjustable reading lamp and built-in seat reading lights. It features a foldable dining table and a cocktail tray under the armrest, as well as a power outlet for laptops and mobiles.

Automated external defibrillator is installed in the train cars for any emergency situations. Large LED information and guidance panels are established at the entrance of each car, so as to provide information to the passengers.

The rolling stock is being manufactured by the consortium of two Hitachi and Kawasaki Heavy Industries. Knorr-Bremse, a German company, was awarded a contract to supply braking systems for the E5 series rolling stock.