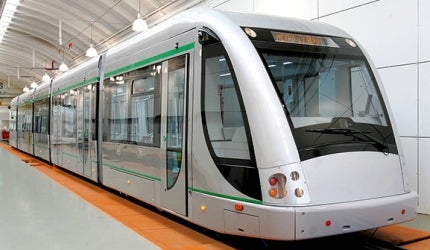 Line 1 of the Seville Metro was partially opened on 2 April 2009 and became fully operational by November 2009. The metro serves around 230,000 people and acts as a vital transport link between the metropolitan area of Seville and the city.

The main objective for establishing the Seville Metro was to facilitate flexible movement between the crucial areas of the city. The metro network assists communication, enhances the lifestyle of the people of Seville and raises its image, in addition to linking a network of cities.

The metro registered passenger traffic of 15.8 million in 2011.

The first line of Seville Metro connects Ciudad Expo in the south-west to Condequinto in the south-east. It is 18km long and covers 23 stations, of which nine are above-ground, three are half-sunk and 11 are underground. It links the Municipalities of Mairena del Aljarafe, San Juan de Aznalfarache, Seville and Dos Hermanas.

The route provides access to many important places in the city and Metropolitan area, such as the Historical Centre, Universidad Pablo de Olavide, Courts of Prado de San Sebastián, Viapol, Cultural Centre, Sports Centre and a number of shopping and business zones.

It is the first metro in Spain to have platform screen doors and a smart-card-based ticket system.

The metro rail project was briefly suspended in 1983 after the construction of the first line for the fear of destroying buildings in the historical centre. The project then comprised stations from Nervión to La Plata and the tunnels built in between.

The plan had been to build overhead rail lines to run rail cars in a single alignment. This was later changed to build all the lines underground in order to serve Renfe’s new station, San Bernando. The south-east part of the project that falls under the Municipality of Montequinto was also built underground. The metro rail project was therefore totally separated from road traffic.

Puerta Jerez Station was opened after line 1 had become operational, following which commercial services on the Condequinto to Olivar De Quintos route had started.

The colour green is used to signify the metro line and the State of Andalucía.

Spain’s capital Madrid, home to over three million people, has one of the most extensive metro systems anywhere in the world. Since its first line opened in 1919, steady expansion has taken place. The late 1990s saw that growth accelerate considerably, with 56km of new lines opening, including 42 new stations in three-and-a-half years.

CAF provided 17 light metro rail cars with low floors for the Seville Metro project in 2006. Line 1 operates a fleet of five section LRVs. The bidirectional units consist of three bogies. The end bogies are operated by four motors and fitted longitudinally and suspended, while the intermediary is a trailer bogie.

The bogies are equipped with rubber primary suspension, resilient wheels and helical spring secondary suspension. The access height of 300mm is in sync with the rails.

The roof and sides of the rail bogies are made of ferretic stainless steel and the under frame is made of corten steel. Five articulated boxes are placed on the three bogies, of which each side has six doors with a clearance of 1,300mm / 800mm. Light rails are 3,390mm in height with an exterior width of 2,650mm.

The trains have 54 seats and 221 standing places per rail car. The maximum speed is 70km/h with a start-up acceleration of 1.2m/s2 and power supply of 560kW. All the rail cars are air conditioned.

Lines 2, 3 and 4 of the Seville Metro are in the pipeline. A station is planned to be built at Guadaíra with an interchange at Renfe’s C-4 Orbital Line.

"The metro network assists communication, enhances the lifestyle of the people of Seville and raises its image, in addition to linking a network of cities."

Line 2 of the Seville Metro will run from Torreblanca in the east to Puerto Triana in the west, via Sevilla Este. Line 3 will run from Pino Montano in the north to Los Bermejales in the south. Line 4 will circularly connect Cartuja, Tamarguillo and Reina Mercedes.

All the three lines are expected to open in 2017.

SNC Lavalin performed detailed engineering on a 4km section of the line 1. SICE was awarded a contract in September 2006 to supply, assemble and implement the tolling and ticketing systems at all stations on line 1. It installed 71 automatic ticketing machines as part of the contract.