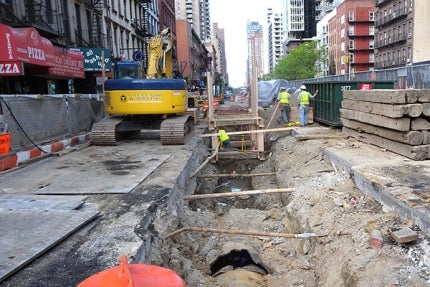 Second Avenue Subway is a new subway system being constructed in New York, US. The two-track line will run 8.5 miles (13.67km) underground from 125th Street to Hanover Square in Manhattan.

The $4.45bn project will also include the construction of 16 new underground stations, which will serve residents of Harlem, Upper East Side, East Midtown, Gramercy Park, East Village, the Lower East Side, Chinatown and Lower Manhattan.

"Construction of the subway started in April 2007 with the first phase completed in December 2016."

The subway will reduce passenger traffic congestion on the Lexington Avenue Line (LAL), while providing better transportation services to the residents of Manhattan.

Construction of the subway started in April 2007 with the first phase opened for passengers in January 2017. Full completion of the project is expected by 2020. The federal government is providing $1.3bn funding for the project.

The subway is owned and operated by the Metropolitan Transportation Authority (MTA) Capital Construction.

The New York City Board of Transportation proposed the Second Avenue Subway project in 1929, but the project was delayed during World War II and poor economic conditions. The MTA initiated the Manhattan East Side Alternatives (MESA) study in 1995 to find alternatives to reduce the traffic congestion on the LAL and improve public mass transportation on the East Side of Manhattan.

The MTA selected a joint venture of AECOM and Arup to prepare a preliminary design for the project in December 2001. The Technical Advisory Committee of MTA approved the conceptual designs of the subway stations in April 2003.

The project received the Green Building Design award from the New York City Department of Environmental Protection and the Federal Environmental Protection Agency in November 2004.
The AECOM-Arup joint venture completed the preliminary design for all phases and was further selected to provide final design for phase one in April 2006. The ground-breaking ceremony of the project took place in April 2007.

The Second Avenue Subway will pass through the entire length of Manhattan. It will provide subway services, including T train and Q train. It will serve as a reroute and extension of the Q service.

The American city of New York led the way with mass transit systems, and got its first metro line as long ago as 1904. In 1953, control of the system was assumed by the New York City Transit Authority, which also took over the running of all metropolitan bus services.

The first phase of the new subway line extends the existing Q line from 96th Street to 63rd Street.

In further phases, the two-track line will connect East Side subway and commuter railroad of 125th Street to north, and will run toward the Financial District in south. It will also link the existing tracks approaching West Midtown and Brooklyn with Second Avenue, through the 63rd Street tunnel.

Infrastructure for the Second Avenue Subway

The new stations will feature escalators and stairs. A handicapped accessible entrance is provided on the south-east corner of 72nd Street station. Each station will be provided with tunnel ventilation and environmental features to increase energy efficiency.

The construction of the project is divided into four phases. Phase one included construction of three new stations at 96th, 86th and 72nd Streets, tunnels from 99th to 62nd Streets, as well as a new entrance on Lexington Avenue. It also included the procurement of ancillary facilities, tracks, signal and power systems, and 68 rail cars. The construction on phase one started in April 2007 and the line was opened in January 2017.

Phase two will include the construction of three new stations at 125th, 106th and 116th Streets, and a subway tunnel section from 110th Street to 120th Street.

New York Metropolitan Transit Authority awarded a $337m contract to S3 Tunnel Constructors, a joint venture of Skanska, J.F. Shea Construction and Schiavone Construction, for the excavation works under phase one. The scope of the contract included the construction of new tunnels from 92nd Street to 63rd Street, and excavation of launch boxes.

The contract also included temporary road decking, construction of an electricity substation, and installation of two access shafts for the 72nd Street station. The contract was awarded in March 2007 and completed in 2010.

"Full completion of the project is expected by 2020."

Judlau received another contract worth $258.35m in February 2013 for the refurbishment of the 72nd Street station.

A joint venture of Skanska and Traylor Bros signed a $210m contract for the construction of the 86th Street station in September 2011.

A joint venture of Skanska and LK Comstock received a $262m contract to construct track systems for phase one. The construction was started in February 2012 and is expected to be completed by the end of 2016.

MTA placed a $324.6m contract with the joint venture of E.E. Cruz and Tully Construction for the construction of new 96th Street station in June 2012. The construction was completed in May 2013.

Mueser Rutledge Consulting Engineers is the geotechnical engineer for the project.

Geocomp is responsible for the construction of the tunnel boring machine launch box and supply of heavy civil/structural package for the 96th Street station.