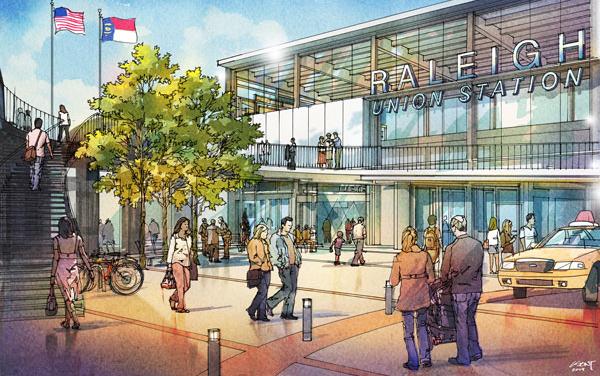 The North Carolina Department of Transportation (NCDOT) Rail Division, the City of Raleigh, and Triangle Transit Authority (TTA) joined forces to develop the Raleigh Union Station in North Carolina, US. NCDOT will serve as a sub-awardee and will be responsible for the project design and construction.

The existing overcrowded Amtrak station on Cabarrus Street will be substituted by a new station to be constructed in the Viaduct Building of Dillon Supply Company in Downtown Raleigh.

The project will be developed in a series of phases, with the first phase scheduled to start construction in 2015 and be completed by 2017. It is estimated to require a total investment of $84.24m.

A 14.9km light rail project that will extend the existing LYNX Blue Line operated by the Charlotte Area Transit System (CATS), in Charlotte, North Carolina, US.

The new train station will be located within the ‘Boylan Wye’ track configuration. It will include construction of new boarding platforms, dedicated tracks for passenger trains, and other track and rail siding improvements to increase the train capacity. The first phase will be constructed in two parts: the Raleigh Train Station and the West Street Extension.

The station building will comprise approximately 6,700ft² of Amtrak passenger service and ticketing operations, 7,500ft² of passenger waiting area, and more than 14,000ft² of commercial and retail lease space. It will also feature three levels of retail and commercial office space and will be a focal point for new businesses.

The existing Prison Siding, which is being used for passing trains and/or railroad car storage, will be extended. A new siding replacing the existing Cabarrus Yard freight car storage tracks will also be constructed.

The existing West Street will be expanded as a road and bridge project. It will be extended as a grade-separated structure under the tracks and the platform. The extension will enable connections between Interstate 40 and the Raleigh Train Station area.

"The existing station’s waiting area is just 1,800ft², which is insufficient for the current level of passengers."

The current Amtrak station was built by the Southern Railway Company in 1950. It currently accommodates eight passenger trains a day and has the second highest Amtrak ridership in south-east US.

The existing station’s waiting area is just 1,800ft², which is insufficient for the current level of passengers. The current ground-level platform is inadequate and unsafe for present demand, with no space for further expansion.

The existing configuration with just one platform on the main track will not be able to accommodate the planned increase in intercity passenger trains and the proposed introduction of the SEHSR corridor trains.

The first phase construction of the Raleigh Union Station is estimated to cost $73m and is funded mostly by grants and other local and state contributions. The funding comprises USDOT TIGER 2012 and 2013 grants of $38m, NCDOT TIGER 2012 Matching funds of $9m, and USDOT ARRA Grant of $15m. The City of Raleigh is providing TIGER 2013 matching funds of $5.75m.

Holt Brothers Construction in partnership with Clancy & Theys Construction and Skanska received the contract for the construction of the railway platform and the civic plaza.

Clearscapes, a company based in Raleigh, is the architect for the station.