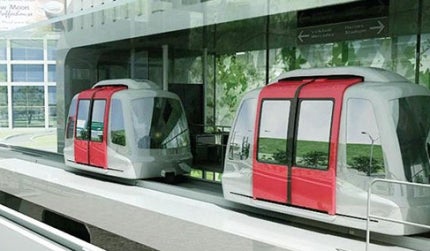 Personal Rapid Transit (PRT) is an innovative urban public transport system jointly developed by the design firm Pininfarina and Vectus Intelligent Transport. It is a light-weight, driverless vehicle, which can be deployed on networks of interconnected tracks.

PRT is designed as an extension of existing pod cars and serves as a subway car on demand, and is used in areas where the demand for transport systems is irregular and high during peak hours.

PRT is being commercially implemented on the Suncheon Bay VECTUS transit project in Suncheon Bay, a world-class tourist attraction in South Korea. The project is being implemented on a design, build, operate and maintain basis, and is scheduled for completion in 2013 and will provide low noise, comfortable and environmental friendly transport for three million tourists annually.

"PRT is designed as an extension of existing pod cars and serves as a subway car on demand, and is used in areas where the demand for transport systems is irregular and high during peak hours."

Though Vectus was founded and registered in February 2005, the basic concept of the Vectus PRT system was developed in April 2002. Construction of the test track began in April 2006 in Uppsala, Sweden, with trails and tests of the prototype starting in December 2006. In December 2007 the vehicle received safety approval from the Swedish Rail Agency.

PRT vehicles are designed to be modern, clean and aerodynamic, and special care is taken to make them compatible with wheel chairs. The doors and windows provide good scenic views from the inside, while cars are equipped with onboard full HVAV air conditioning systems.

The vehicles can be configured based on the requirements of the client. In general, PRTs are designed with a seating capacity of six to eight passengers and an additional standing space for six passengers. A typical PRT car is 3,740mm long, 2,100mm wide and 2,500 high, while its doors are 900mm wide and 1,950mm high.

PRTs can travel at speeds of 70kmph with a maximum load of 2,500kg. The speed of operation on curvy tracks varies depending on the radius of the curvature. Typically PRTs travel with speeds of 16kmph, 26kmph and 36kmph for 20m, 50m and 100m curvature radii respectively. Acceleration of the vehicle is 1.2m/s2 with an emergency deceleration of 5m/s2. PRTs consume 0.24Wh/km energy when operating with full load capacity at 30kmph, while the minimum turning radius of the vehicle is 10m.

In an emergency situation or breakdown, PRTs have an option to push failed vehicles from behind to the nearest station.

Seoul metropolitan subway in South Korea is the most widely used rapid railway transport system in the world, featuring ten subway lines. The system serves nearly ten million inhabitants of the capital city, Seoul, and the provinces of Gyeonggi, Incheon and northern Chungnam.

PRT guideways are constructed with standardised dimensions, allowing flexibility and variety in usage, as well as being simple to install and modify. It consists of open steel or a concrete beam and overhead rails with less than 10% gradient and 1,400mm width.

Stations that handle PRT vehicles can be small, flexible and designed to be easily adaptable for physically handicapped, visually impaired and hearing impaired passengers. The gap to the platform is less than 30mm.

The control system of the PRT is designed with four levels of architecture, which consists of a central controller, various zone controllers, motor controllers and a vehicle controller. The transmission of critical control and status messages between the control system and PRT vehicles is handled by means of a communication system.

The drive technology and process of current collection are optimally selected according to project requirements, such as network complexity, track length, gradients and environmental conditions.

PRT offers many special comfort features that are not always found in other transport systems, such as scheduled busses, light rail transits and automated people movers. This includes on-demand services to passengers with short or no waiting times, while passengers can travel directly to their preferred destinations without stopping in between as the intermediate stations are bypassed. Therefore, the average speed is higher than any other transport systems.

PRTs provide round-the-clock availability and the privacy of personal automobiles. They are energy efficient and offer low operating costs, the infrastructure required is comparatively cheaper and easier to build and operate and the vehicles travel on smaller tracks with smaller turning radii, which helps for easy integration into an urban environment.

"PRTs are capable of operating in extreme weather conditions, such as snow and ice on the tracks."

PRTs are capable of operating in extreme weather conditions, such as snow and ice on the tracks. External noise produced by the vehicles is very low.

PRTs can be used in airports, shopping malls, university campuses, hospitals, business parks and at tourist attractions. They can be used as extensions of existing transport modes and in park and ride urban environments. PRTs can also be used for freight operations.

Development of the PRT vehicles involved several companies. Noventus developed the control hardware and software used for the operation of the vehicles, while Lloyd’s Register, WGH and TDi were involved in the manufacturing of the vehicle.