A fleet of 22 Citadis TGA 301 trams are in operation on Line A of the Orleans-val-de-Loire system.
Line B will use the Alstom APS ground power supply through the historic centre of the city.
Inside the Citadis trams present a modern interior.
Maintenance is carried out at a dedicated facility. 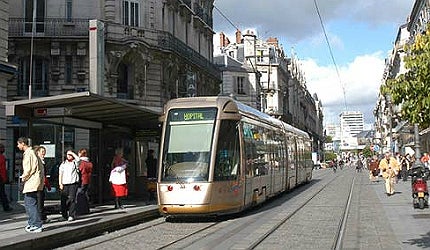 Second generation tramways are becoming an important and supported mode of urban transport in France, with new systems sprouting in many of the country’s large cities, as well as smaller population centres.

The past decade has seen a boom in light rail systems, and one city aiming to take advantage is Orléans-Val-de-Loire, located 125km (78 miles) south of the capital Paris, on the banks of the River Loire.

The historic city (population 250,000), with its magnificent architecture, was the smallest city in France to enjoy the benefits of light rail when the first line opened in November 2000.

Success of Line A and plans for Line B

"With six years of experience with Line A in Orléans-Val-de-Loire, Line B will represent another giant leap forward for the French city."

With six years of operation on Line A of the Orléans light rail system, an order was placed in September 2006 with Alstom for construction of a second line – Line B. Line A runs north-south through the small city, and Line B will cross east-west on a 12km (7.5 mile) alignment.

The contract is worth €108m, and covers the complete design, manufacture and installation of Line B, including an order for 27 new Citadis Trams to bolster the existing fleet.

Following the precedent set by the French cities of Angers and Reims, Orléans’ Line B will make use of the revolutionary Alstom APS ground level power supply, which removes the need for overhead wires dominating the skyline. The line is being constructed using Appitrack, Alstom’s innovative and award winning automated track-laying technology.

Line A was brought into service on November 24 2000, two years after a contract was awarded to Alstom for its construction. The north-south route is 17.9km (11 miles) long and links Orlean-La Source-Hopital de la Source with Fleury-les-Aubrais Jules Verne via the centre of the city. It also provides direct connections between the main railway station – Gare d’Orleans – university and the city’s second station at Gare des Aubrais.

"The Alstom Citadis light rail vehicle has not only become the tram of choice in France, but it now has 860 in service across the world."

The route has been built to the European standard 1,435mm gauge with conventional overhead power supply and has 24 stops at an average interval of 800m. Average speed on Line A is 23km/h and the route is fully segregated from road traffic, to maintain the efficient and frequent three-minute interval service.

Following the success of Line A, Alstom was chosen to build Line B – project name CLEO – on an east-west axis through Orléans-Val-de-Loire, with the target of having revenue earning service in 2012.

The route will have a total of 26 stops built to a similar style as those on Line A and connect the area of La Chapelle-Saint-Mesmin with the town of Saint-Jean de Braye. To attract passengers onto the light rail system, six park-and-ride sites will be provided along the route of Line B.

The novel feature, Alstom’s revolutionary APS ground level power supply, negates the need for overhead wires, which in a historical city such as Orleans, would be unsightly alongside the highly decorative buildings of the city centre. In total, one kilometre of the route will use the APS system to avoid the cathedral and perspective of Rue Jeanne d’Arc being spoiled by overhead electrification.

The Alstom Citadis light rail vehicle has not only become the tram of choice in France, but it now has 860 in service across the world, and the design has proved its reliability over 76 million kilometres in service. A total of 15 cities in France have ordered the design, whose modules and front end design can be tailored to individuals’ needs.

Orléans-Val-de-Loire’s first line is worked by a fleet of 22 Citadis TGA 301 cars, which can carry 178 passengers with 40 seated in each set. They are similar to those in service on the Montpellier system and include low-floor sections between the bogies for disabled access. Each car has four doors.

The new order is for a total of 27 Citadis cars, six of which are optional. Each set will be able to carry 200 passengers and the vehicles will be assembled at Alstom’s La Rochelle Factory in France. In addition, Tarbes will supply the traction drives, Ornans the traction motors, Le Creusot the bogies and Villeurbanne the onboard electronic systems.

Signalling and communications from Alstom

Alstom will supply the signalling system as part of its contract for the construction of Line B. Trams will be given priority at road junctions to maintain service frequency and are expected to operate on a segregated alignment.

With six years of experience with Line A in Orléans-Val-de-Loire, Line B will represent another giant leap forward for the French city.

The two lines will form north-south (Line A) and east-west (Line B) links across the city, providing greater travel opportunities from outlying neighbourhoods to the city centre, university and hospitals.

Alstom is working towards a 2012 target for the opening of Line B which will almost double the length of the system and also the number of light rail vehicles running in the city.