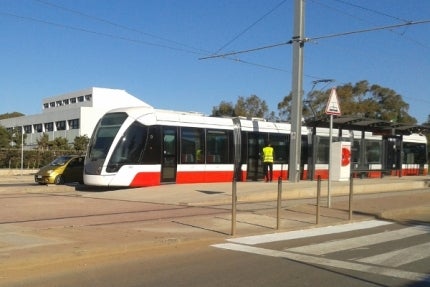 The Oran tramway system was opened for public in May 2013, following around five years of contruction. The 18.7km-long tram line covers 32 stations, handling 90,000 passengers per day, and will serve approximately 88 million passengers per year, reducing travel times by 20% to 30%.

The tram system is operated by RATP Group, which is represented in Algeria by SETRAM.

Details of the Oran Tramway

The Oran tramway project is part of Entreprise du Métro d’Alger’s (EMA) plan to build a tram network to improve public transport in Algeria, which was announced in 2006. Light rail developments in Algeria are currently targeting the completion of three new systems by 2020, Oran tramway being one of them.

The project also included the construction of two main structural components, a hopper (underground station) and a bridge. The 358m-long hopper was constructed to allow the transit of trams from Hammou Mukhtar to Dar el Beida.

The new bridge was constructed at the intersection point of 3rd Avenue. The bridge consists of 25 viaduct spans and is 259m long.

The Oran Tramway system consists of a single line. It includes double track platform for major portion (17.7km) along with some single track. It runs from Depot Sidi Maarouf to Depot Senia at Senia University.

A number of expansion plans are in place for the Oran tramway system. One of them is the northerly extension from the Hatab bus station to Benarba. It will be 8.6km and will add 12 stations.

SETRAM was selected in October 2012 to provide operation and maintenance services for the Oran tramway network for the next ten years.

Tramnour consortium consisting of Alstom and Isolux Corsán was awarded a €355m ($471.36m) contract by Entreprise du Métro d’Alge. Alstom’s share of the contract was valued at €148m. Alstom supplied 30 Citadis Type trams, signalling and communication systems, depot equipments and substations for the project as part of the contract. Isolux Corsán provided civil engineering, track and electrification engineering, and overhead services for the project.

Isolux Corsan awarded a subcontract to Telvent (TLVT) to provide its Telvent SmartMobility Light Rail solution for the Oran trams in August 2010.

"The tram system is operated by RATP Group."

The Citadis is a low floor tram produced by Alstom Transport. The trams are installed with climate control systems, video surveillance and passenger information systems. The tram is furnished with air conditioning systems. The integrated low floors of the tram provide comfort to disabled passengers. The tram can accommodate 325 passengers (72 seated and 253 standing).

Each tram set of the Oran tramway is 43.9m long. The sets are designed to attain a maximum speed of 30kmph to 50kmph. Alstom built the trams at its Santa Perpetua de Mogoda plant in Spain.