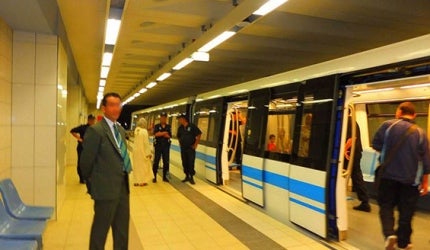 The underground transit system currently has one 13.2km line with 14 stations, which was built with an investment of £750m. RATP El Djazaïr, a subsidiary of Régie Autonome des Transports Parisiens (RATP), was awarded an eight-year contract by Entreprise Métro d´Alger transit authority (EMA) to operate the line.

A 4km extension (Extension B) for Line 1, from Haï El Badr to El Harrach-Centre, was launched in October 2012. The Extension B entered into service in July 2015. Two more new extensions of the Line 1are scheduled to complete by 2017.

The rapid transit system was originally proposed in the 1970s as a 64km network. It was officially launched in 1982 with feasibility studies completed in 1985. A German firm and a Japanese specialist were employed for construction of the network.

The project, however, stalled due to a lack of funding following the fall of oil prices, one of Algeria’s main resources. Construction restarted in 1988 but discontinued again due to financial and political problems. During this period, only four stations were constructed.

"The underground transit system currently has one 13.2km line with 14 stations, which was built with an investment of £750m."

Proposals for relaunching the project by inviting tenders from international participants were discussed in 1999. Two new contractors, French firm Systra-Sgte and Agéro-German GAAMA were chosen for project management and construction, respectively. By 2003, Algeria’s economy stabilised and the metro project secured the necessary funding for construction.

In January 2006, EMA awarded a €380m turnkey contract for construction of the metro to a consortium formed by Siemens, Vinci Constructions and Construcciones y Auxiliar de Ferrocarriles (CAF). The consortium was responsible for civil works, supply of electrical and mechanical systems, and fitting out.

Around 100 tests were conducted on the metro line in September 2011, with the line carrying out its debut passenger operation on 1 November 2011.

Africa’s second largest country, Algeria, is due to progress from having no light rail to three new systems in operation by 2020, as part of an emerging national revival of interest and resources for public transport.

Extension C of the Line 1 will be 3.5km-long with three new stations, connecting Hay El Badr with Ain Naadja. The 1.4km-long third extension will run from Emir Abdelkader to Place des Martyrs.

CAF supplies 14 six-car train sets for the metro, each with a capacity to accommodate 1,290 passengers. The first train was delivered in November 2008, with the remaining deliveries completed by November 2011.

Signalling and communication on the Algiers Metro

Vinci Constructions was responsible for civil works of the project, which included construction of ten stations, the Bachdjarah depot, the control centre and maintenance depot. Tunnel ventilation and installation of escalators was also carried out by Vinci.

Thales was subcontracted by Siemens to supply ticketing systems for the metro, while a consortium of Colas Rail, a subsidiary of Bouygues, and KOU GC have been awarded a €85m contract for the Line 1 extension.

The Colas Rail and Kou GC JV secured two contracts totalling €168m, of which Colas Rail’s share includes €86m for the Extension C of the Line 1.

Klein and Thales Italy supplied 50 tripods and 12 low-mobility gates for access control in the four new stations of the Line 1 Extension B. Ensitrans was awarded a €3.5m contract to provide project management services for extension of Algiers Metro