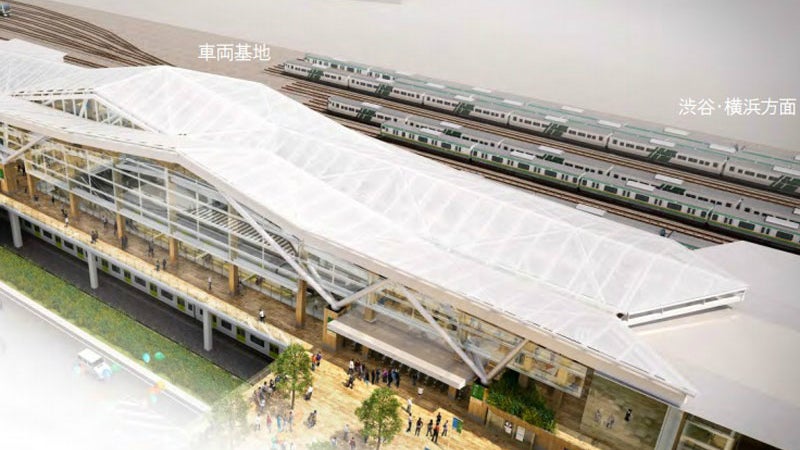 The new Shinagawa railway station (tentatively named Shinagawa Shin-Eki) is being developed at the 200,000m² rail yard located in the Konan district of Minato, Japan. The station was proposed by East Japan Railway Company (JR East) as part of the Shinagawa redevelopment project in 2014.

Construction of the new station, which will service the Yamanote Loop line and the Keihin-Tohoku line, began in February 2017. It is aimed to be temporarily opened before the Tokyo Summer Olympic and Paralympic games scheduled to be held in 2020.

Full-fledged operations at the station are expected to commence only after the completion of all construction works, including shopping and dining facilities inside the station building by 2024.

The station will be located 0.9km north of the existing Shinagawa station and approximately 1.3km south of the Tamachi station. It will be close to Haneda airport and the Sengakuji station.

The station is planned to be established as an international exchange hub by developing 130,000m² of the Shinagawa-Tamachi area located adjacent to the site. The area was designated as Special Zone for Asian Headquarters by the Japanese government for establishing regional headquarters and research and development (R&D) centres.

The station design is inspired by the traditional Japanese art of Origami. The station will occupy a gross area of 7,600m² and include two island platforms and four tracks. The main entrance of the station will be located in a public square above the tracks.

The second and third floors will have a floor space of 500m². The first floor of the station building will feature an open ceiling for the platform.

The station building will feature a 1,000m² central atrium surrounded by a raised concourse. The atrium and concourse will feature air and light, and will be enclosed by trees.

Structure and materials used for the Shinagawa railway station

The station building will be covered with 4,000m² glass and steel roof, which will be supported by wooden pillars. The roof will include film material with high solar reflectance to reduce temperature rises inside the concourse during summer.

The east and west sides of the station building will be covered with massive glass windows, which will offer panoramic views from both inside and outside the building.

"The station building will feature a 1,000m² central atrium surrounded by a raised concourse."

The frame of the building will be made from a combination of steel frames and wood laminated timber, which will be covered with a translucent Teflon membrane.

Facilities in the Shinagawa station building

The station will feature eight escalators, six elevators, and two ticket gates each at north and south entry points. Four multi-functional toilets at the north and south locations of the building will also be available.

A solar panel and a small wind power generator will also be added to the building.

Kengo Kuma was selected to design the new Shinagawa station complex in 2014. The construction contract for the station was awarded to a joint venture of Ohbayashi Corporation and Iron Building Company.

Qmatic
Qmatic has a long history of improving efficiencies in the...
SUBSCRIBED