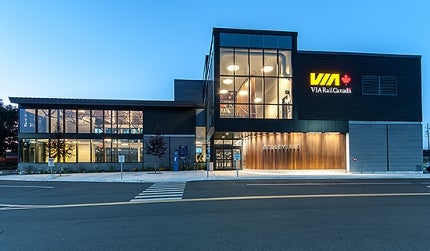 VIA Rail, the national rail service operator of Canada, inaugurated the new Belleville Railway Station in Ontario in September 2012. The station, constructed adjacent to the existing station in Belleville, opened to the public in March 2012.

"The enhancements aim to improve the train safety, increase frequency and minimise travel times along the route."

The $18m station project was undertaken as part of various enhancements being carried out by VIA Rail along the Ontario-Quebec Route. The enhancements aim to improve the train safety, increase frequency and minimise travel times along the route.

The Government of Canada provided the funds needed for the station project, including $2.5m from the Economic Action Plan of Canada, which looks to generate more jobs and enhance the infrastructure of the country.

Belleville station, an important point on the Ontario-Quebec railway route, was originally constructed in 1856. The station was officially recognised as a heritage structure in 1973.

The Belleville railway station is positioned at number ten in the national network of VIA, in terms of traffic handled. The old station was, however, unable to match the pace of the rapid growth in passenger flow, while the schedules of freight and passenger trains were clashing.

The construction of a new station at the same location was agreed upon as a solution for these issues.

New Belleville station, on which construction started in December 2010, has been designed aesthetically appeal passengers. An unused baggage building was demolished to provide space for the new station, overhead footbridge, platform and elevators.

Vaughan Corporate Centre (VCC) is an underground subway being built near Highway 7, west of Jane Street in Ontario, Canada. It is part of the Toronto to York Spadina Subway Extension (TYSSE) Project and owned by the Toronto Transit Commission (TCC). It is expected to be operational by 2015.

The new station has been constructed to complement the adjoining heritage station. The new Belleville station has an island platform that provides space for a larger number of trains. A portion of the work was carried out at night, owing to issues of train movement and access.

The main track was shifted to the north and a new track was added while building the new island platform. The new track provides smoother passage for freight trains at the station, even when travellers are boarding or alighting from passenger trains. The island platform is equipped with heating system to eliminate the need for snow removal machines.

The new Belleville station has been built with modern materials and includes sustainable features. The waiting area’s energy efficient windows provide lots of natural light and an unhindered view of the island platform, walkway and tracks, while LED lighting has been used for all exterior lamps.

"The station was officially recognised as a heritage structure in 1973."

The new loading platform includes elevators on either side, helping the passengers to conveniently move around the premises. A Wi-Fi system is also installed at the station.

Platforms and ticketing areas at the new station are wider than those at the old Belleville station. Other passenger facilities include waiting areas, parking and drop-off facilities, and provision for food and beverage outlets to be set up in future.

J.J. McGuire General Contractors was awarded a lump sum contract by VIA Rail, for the construction the new Belleville Railway station. Girard Côté Bérubé Dion was the architect for the new station building.