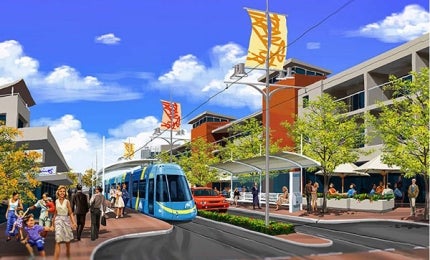 Metro Area Express (MAX) is a proposed 22km-long light rail network that will link Mirrabooka area in the north with the central business district of Perth, Australia. The project is being developed by the Western Australian Department of Transport (DoT).

Although the state government is committed to deliver the MAX in full, the project has been postponed for three years due to budgetary concerns. Under the revised schedule, the tendering process will begin in early 2018 and construction in 2019. The first services of MAX are expected by late 2022.

The Western Australian DoT is working in association with different state and local government agencies to realise the MAX project.

The MAX network has been envisioned by the DoT to resolve the public transportation bottlenecks within the Perth metropolitan area. The plans for the light rail system were unveiled in September 2012.

"The Western Australian DoT is working in association with different state and local government agencies to realise the MAX project."

The new light rail system will be built on existing roads of the Perth, but will be mostly divided from other vehicular traffic. The trains will run every five minutes at peak times.

The project will bring in an efficient mode of public transport in Perth, by providing a frequent and sustainable mass rapid transit system in the inner-north and central west and eastern areas of Perth.

The MAX project will act as a catalyst to transform the city by stimulating revivification and new developments along the proposed corridor.

The first stage of the MAX network will include a 22km-long route including a section between Polytechnic West campus in Balga and City Square in the Perth CBD, and branch lines from City Square to the QEII Medical Centre (QEIIMC) and the Causeway in Victoria Park.

The proposed second stage will extend the route in future from the QEIIMC to the University of Western Australia and from Victoria Park to Curtin University and the new Perth Stadium at the Burswood Peninsula.

The MAX network will feature smoke-free stations equipped with shelter, seating, CCTV cameras, ticket machines, SmartRider contact point and electronic information displays. The height of the platforms will be raised to match the floor height of the rail vehicles.

Each station within the network will be designed in line with the neighbouring developments and anticipated clientele. The stations and light rail vehicles will feature CCTV cameras and help alert buttons. The stations will be provided with park-and-ride facilities and bike parking as part of the MAX project.

Each LRV will have the capacity to transport up to 300 people, which is equivalent to the capacity of three articulated buses. The vehicle will measure between 32m and 43m in length and offer seating and standing space, as well as dedicated area for wheelchairs and strollers.

The low-floor vehicles will be at the same level as the platform, whicb makes them fully accessible to disabled and elderly passengers, and will stop at every station.

The fully air-conditioned vehicles will be equipped with passenger information displays, route maps, CCTV cameras, and an emergency button to contact the driver in case of any incident.

Ticketing on the MAX will be fully integrated with other modes of public transport in the city.

Further funding is anticipated to be secured from the state government and private parties.