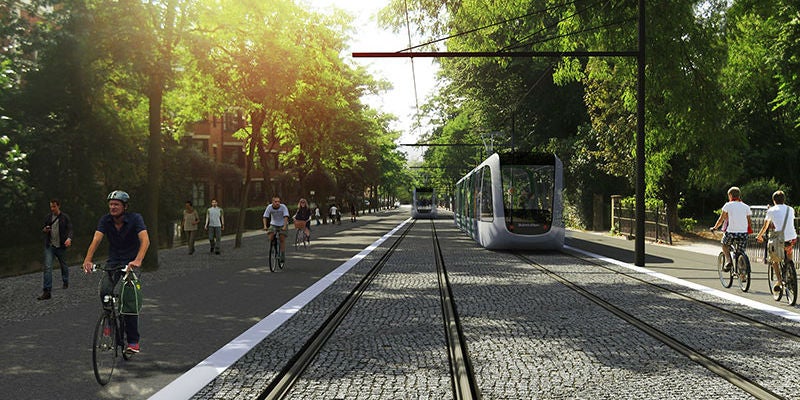 The Lund Tramway is a proposed 5.5km-long, double-track tramway planned in the city of Lund in Scania (Skåne), southern Sweden.

The tramway will connect the Lund Central Station (Lund C), the main railway station of the city, and the European Spallation Source (ESS), a newly developed, multidisciplinary research facility in Brunnshog. It is planned to be extended up to Dalby in Lund municipality in future.

The project is a part of a comprehensive urban renewal and development project, which includes housing and offices for approximately 50,000 people in north-eastern Lund.

"The project is a part of a comprehensive urban renewal and development project, which includes housing and offices for approximately 50,000 people in north-eastern Lund."

The project was approved by the Lund City Council in December 2015. The Municipality of Lund and Region Skåne, as well as the County Council of Scania County are executing the project in collaboration with Spårvagnar i Skåne (Trams in Skåne).

Construction of the new tramway will commence in 2016 with major parts of the route to be built on grass. The first tram on the line is scheduled to run in 2019.

The city of Lund is one of the fastest growing regions in Sweden. The city’s population doubled in 50 years with the current population standing at more than 115,000 (2015 estimate), which is projected to increase by 1,000 inhabitants a year.

The rapid urbanisation resulted in comprehensive city planning, which focused on developing the city inward through compression, and creating clear zones, meeting points and connected neighbourhoods.

Brunnshog to Lund is one of the major areas identified for development during the city planning. Popularly known as Knowledge Corridor, the stretch between Lund C and ESS is one of busiest commuter routes in Lund.

Besides connecting passengers with rail services, the corridor is home for main offices and research institutions in the region. On a typical weekday, approximately 40,000 people get on and off trains at Lund C. The newly opened ESS is also expected to create more jobs in future, resulting in a significant increase in the number of people using the knowledge corridor route.

A tram transport system, which is compact but can carry more people, was initially seen to be an ideal solution to ease the increased travel and support the city’s growth.

The tram route will connect Lund’s medieval city centre to Brunnshog, a completely new city in the north-east. The tram will halt at nine different places in between the cities, including University Hospital (Universitetssjukhuset), Lunds Tekniska Högskola (LTH), Ideon, Hojdpunkten, Solbjer, Brunnshog centre and MAX IV.

The trams will initially run every 7.5 minutes and will have their own street space without sharing it with other traffic.

Rolling stock for the Lund tramway

The tramway will use seven modern and accessible trams each having a length of approximately 30m and breadth of 2.65m. The trams will accommodate 130 passengers, considering two people per square metre.

The carts will incorporate a design that blends its exteriors with the surrounding, which will be mostly green. The exteriors will feature a grey base, reflective grey arrows and green elements that are visible in poorly lit areas. Boarding doors for regular passengers will have a grey accent colour, while an orange accent will be used for travellers with special needs.

The estimated investment for the project is Skr776m ($91m), part of which will be jointly funded by the Municipality of Lund and the Swedish Government.

Seven trams will be procured at a cost of approximately Skr175m ($20.6m), while Skr180m ($21m) will be spent for the depots, all of which will be financed by Region Skåne.

The Finnish Transport Agency granted a Skr298m ($35m) loan to the city council.