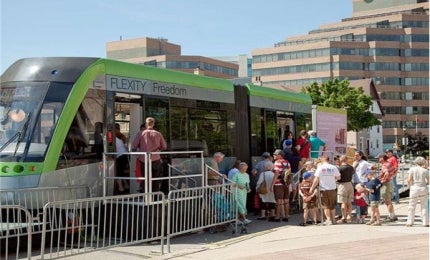 ION is a new rapid transit system planned for the region of Waterloo, Canada. It will connect three of the country’s major urban centres; Cambridge, Kitchener and Waterloo. It will be one of the biggest public infrastructure projects to be undertaken in Waterloo and will add to Canada’s extensive rail network, which is one of the longest in the world.

Necessary approvals concerning the technology, route, stations, staging and funding for Stage 1 of the ION project were received from the regional council in June 2011. The light rail transit (LRT) project calls for an investment of $818m and achieved financial closure in May 2014.

“It will be one of the biggest public infrastructure projects to be undertaken in Waterloo and will add to Canada’s extensive rail network.”

The Waterloo rapid transit system will be a 36km corridor, consisting of 22 stations. It will include a light rail transit between Waterloo and Kitchener, and an adapted bus rapid transit (aBRT) between Kitchener and Cambridge.

The project is being developed in two stages; the first stage will involve the construction of a 19km-long LRT line between Conestoga Mall in the city of Waterloo and Fairview Park Mall in Kitchener. It will also comprise a 17km-long aBRT between Fairview Park Mall and the Ainslie Street Terminal in Cambridge. The second phase will involve conversion of the aBRT service to LRT.

The light rail transit was approved by the regional council in February 2012 and is planned to be implemented through design-build-finance-operate-maintain (DBFOM) approach. The region of Waterloo will own the LRT system (including infrastructure and vehicles), as well as set the fares and the service frequency and collect the revenues. It will also be responsible for customer service, system-wide integration and monitoring the performance of the contractors.

The light rail vehicles on the LRT would run from Conestoga Mall in Waterloo to Fairview Park Mall in Kitchener. The line will comprise six stops, including an interchange with bus and rail services at King Street. Park-and-ride facilities will be provided at Northfield, Fairview Park Mall and Sportsworld rapid transit stations.

The Regional Connector Transit Corridor is an underground light-rail system in downtown Los Angeles, California, US.

Construction of the aBRT is expected to begin in 2014 and services will be launched in early 2015. The aBRT will feature vehicles running in mixed traffic and having special features such as limited stops, transit signal priority and queue jump lanes enable faster, consistent and convenient service.

The aBRT is expected to build ridership numbers south of Fairview Mall and ensure funding for the Stage 2. The Council has already approved the allocation of $1 million a year for ten years for boosting the ridership and encouraging the development along the central transit corridor in Cambridge.

The rolling stock for the ION rapid transit service between Kitchener and Waterloo will encompass 14 Bombardier Flexity Freedom light rail vehicles (LRV). The Regional Municipality of Waterloo signed an agreement with Bombardier in August 2013 to deliver the trains, which are worth approximately C$66m ($63m). The first delivery is expected to be made in 2016.

Parsons Brinckerhoff was appointed as the general engineering consultant for the LRT project. The contractual scope includes providing assistance to the regional government in preparing design criteria and performance requirements for the LRT.

The Government of Ontario funded $300m for the first stage of the LRT. The Region of Waterloo also funded C$253m, while the federal government will fund up to C$265m. Alberta Treasury Branches arranged finance for the LRT project, while CIBC World Markets acted as the senior bond underwriter.